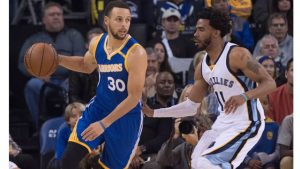 Kevin Durant appreciates so many role players doing their part given greater responsibility for the injury-plagued Warriors.

Come playoff time, it could make Golden State that much tougher to beat.

Klay Thompson scored 27 of his 29 points in the first half and made his first nine field goals, leading the undermanned Warriors past the Memphis Grizzlies 97-84 on Wednesday night for their 10th straight win.

Durant added 22 points, eight rebounds and two blocked shots as Golden State was down five regulars again, including two-time MVP Stephen Curry out for his sixth straight game with a sprained right ankle.

“Obviously we want our whole team back,” Durant said. “Coach knows how important guys coming off the bench are. It’s only going to be good for confidence.”

Thompson shot 10 for 16 overall and didn’t miss until a 3-point try with 6:10 left before halftime.

Curry tweeted in the midst of Thompson’s hot start: “Somebody is having a great game!”

Thompson received a rare technical — his seventh in seven seasons — with 10:22 left in the game for arguing when he thought he was fouled.

“Gotta keep my cool,” Thompson said. “Learn from it.”

He didn’t get as many touches after intermission.

Marc Gasol had 21 points, nine rebounds and five assists for Memphis, which started a stretch with seven of eight games on the road. The Grizzlies were 10 of 44 in the second half, shot 12 for 31 from 3-point range and committed 17 turnovers.

“I think we got a little more static in the second half offensively, a little more predictable,” Gasol said. “The ball didn’t move as much.”

The Warriors had their own issues after the break.

“We were stagnant, we had guys standing around, we didn’t seem to be playing with much energy,” coach Steve Kerr said. “Guys didn’t want to run. We were standing constantly on the perimeter.”

Omri Casspi came off the bench to contribute 12 points and six rebounds. Kerr would far prefer a healthy roster, but he appreciates the opportunities many of his role players are receiving to play more significant an important minutes.

“I like it,” said Kerr, who certainly wasn’t pleased with the 16 turnovers.

The Warriors began a seven-game homestand in a stretch with nine of 10 games at home before next playing away from Oracle Arena on Jan. 3 at Dallas.

“It just says we’ve had lots of talent,” Kerr said. “It’s a good time to be a Warriors fan, obviously, or a Warriors coach.”

Curry did some light on-court work at morning shootaround a day after the Warriors said the two-time MVP would be out at least another week with the ankle injury. Kerr said it was Curry’s first time moving laterally, and he wouldn’t scrimmage or practice before being examined again.

“He had a good day today. He was working out with Steve Nash and Q (Bruce Fraser) and got a lot of good stuff and it looked like he was moving pretty well,” Kerr said. “A good sign.”

Golden State has won all six games since Curry injured the ankle on Dec. 4 at New Orleans.

Curry will miss two more games this week, as well as the Christmas Day showdown against Cleveland before getting evaluated again.

Grizzlies: Memphis beat the Warriors 111-101 at home on Oct. 21. Now, the Grizzlies started and will end Golden State’s homestand, returning to Oracle Arena on Dec. 30. They play at Phoenix twice in six nights beginning Thursday, going home in the middle before a second visit to the desert next Tuesday. … Rookie Ivan Rabb, who’s from Oakland and attended California in nearby Berkeley, made a late appearance.

Warriors: Thompson’s first-half points were his most in any half this season. … Also out for the Warriors were Andre Iguodala (flu-like symptoms), Draymond Green (right shoulder soreness), Shaun Livingston (sore right knee) and Zaza Pachulia (left shoulder soreness). Pachulia, who missed playing on his bobblehead night, could do contact work in practice as soon as Thursday when Green is expected to scrimmage after sitting out five of the last six games. … Golden State had just two fast-break points. … Damian Jones got his first action of the season, up from the G League.

Grizzlies: Complete a back-to-back at Phoenix on Thursday night.

Warriors: Host the Lakers on Friday night after a 116-114 overtime win Monday at Los Angeles. Golden State has won the last five meetings overall and nine in a row at home.

Check out the team sites for the Memphis Grizzlies and the Golden State Warriors for more game coverage.