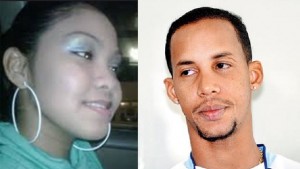 LENDL SIMMONS (RIGHT) WAS FOUND TO HAVE BREACHED THE CONFIDENTIALITY OF THE RELATIONSHIP WITH THERESE HO (LEFT).

PORT OF SPAIN, Trinidad, Monday October 26, 2015 – West Indies cricketer Lendl Simmons has been ordered to pay his ex-lover TT$150,000 (US$23,695) in compensation for sharing sexually explicit photos of her after they ended their relationship.

The ruling was made this morning by High Court Frank Seepersad who said Simmons breached the confidentiality of his relationship Therese Ho, when he sent the photos of her naked and having oral sex with him, to other people.

In addition to ordering the compensation, Justice Seepersad ordered Simmons to delete any of the photographs he had and not to disseminate them any further. The copies of the photos used during the case are also to be destroyed, the judge said.

Simmons and Ho were involved in a sexual relationship that started in March 2013, at which time the cricketer was living with his fiancée. During their affair, they several photos, including some of Ho nude and others of her performing oral sex on Simmons.

Ho testified that when she ended the relationship and informed Simmons’ fiancée about what had transpired, as she felt she had a moral obligation to do, he began distributing the photos to her friends and some of his own friends to embarrass her.

The woman said she was subjected to public ridicule and she had suicidal thoughts as a result.

Simmons, meantime, admitted he showed some of the photos to the father of one of Ho’s children, with whom she was in a relationship, but only after she showed photos to his fiancée.

But Justice Seepersad, in his ruling, reprimanded Simmons for not only distributing the photos to several people, but for the way in which he referred to the 24-year-old mother of two.

“. . . His statement as contained in the messages that “she was just a f–k” is unacceptable. The treatment of women as mere objects of pleasure is offensive, derogatory, antiquated, has no place in a civilized society and is indicative of the general lack of respect,” he said, although also chastising Ho for getting involved with Simmons in the first place.

“On the evidence, the Court is convinced that the defendant wanted to inflict mental and emotional harm to the claimant . . . There can be no circumstance that is more private and confidential than where parties are engaged in consensual sexual activity in private . . . All photographs and recordings which capture sexual practices conducted in private should only be disseminated where the express consent of all the parties involved has been obtained.

“The distribution of sexually explicit images including the uploading of such material unto the internet, without the consent of the depicted subject cannot be condoned in civilized society,” Seepersad added.

The judge also expressed concern that legislation had not kept pace with developments in society, and suggested that laws needed to be adjusted to address issues surrounding the use of social media.

“The impact of social media and its consequent effect on individual and collective privacy have to be acknowledged and addressed,” he said.

“Deeming legislative provisions that create a rebuttable presumption of ownership and responsibility for material posted on one’s social media page, Facebook account or from an individual’s email address should therefore be considered. The time for legislative intervention is long overdue.”