Home / Sports / Harden on ending Warriors’ streak: ‘We can compete with anybody’

Harden on ending Warriors’ streak: ‘We can compete with anybody’ 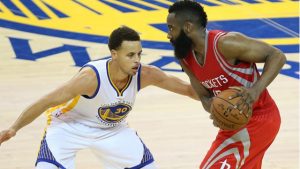 OAKLAND — It was late, even for the West Coast, when the Houston Rockets finally exhaled. The Rockets earned a thrilling, pulse-pounding, you-needed-to-stay-up-late-for-this, 132-127 double overtime victory over the Golden State Warriors on Thursday night.

It ended the Rockets’ eight-game losing streak against the Warriors and probably, more than anything else, was one of those statement wins for Mike D’Antoni’s team.

“It was a statement to show the whole NBA we can complete with anybody in this league,” Patrick Beverley said. “We’re a very confident team, that’s one thing Coach has instilled in this team, especially in the beginning [of the season]. We can play and we can beat anybody and that’s our type of swag. We’re not cocky, we’re just confident.”

The gritty Rockets have moved to 3-1 on this five-game road trip that ends Friday night in Denver. And it will be another challenge for the Rockets. In the past 10 seasons, opponents have a .242 winning percentage against the Nuggets with zero days rest.

It doesn’t matter for the Rockets, they’ll worry about the Nuggets at some point on Friday night, for now it’s about savoring what was just accomplished.

Ryan Anderson had a season-high 29 points, including two deadly corner 3-pointers with the shot clock expiring in the closing moments of regulation.

D’Antoni pushed his belief in second-year forward Sam Dekker to new heights. He played Dekker 26 minutes, including late in the game and in both overtimes. He was rewarded with 11 points and career-tying eight rebounds.

Trevor Ariza was outstanding in both overtime sessions against the Warriors. Kevin Durant, Stephen Curry and Klay Thompson were a combined 0-6 with Ariza guarding them. Ariza’s shot was off, he missed eight of 13 shots, but his defense was key down the stretch.

Of course this game wouldn’t be complete if not for James Harden, who recorded his fourth triple-double of the season. He bricked a step-back jumper that would have won it at the end of regulation. But he did so many other things. He scored 29 points, snagged a season-high 15 rebounds had produced 13 assists. He was even kicked in the face by Draymond Green in the second overtime, and after a review, it drew a flagrant foul 1 on the Warriors forward. Harden said the Invisalign on his teeth saved him from some major damage but he wasn’t mad that he got popped in the face. He was more proud of what occurred for his team.

The Rockets were able to survive a game like this, something that might not have occurred last season. But that’s ancient history and this new history dictates it’s going to be different for the Rockets.

“It was a good win for us, especially a bounce back win after we got whupped in Utah,” Harden said. “Great, great intensity, great atmosphere, a gutty game. Two overtimes, it’s great for our team that we came away with that win.”

The other night in Utah, the Rockets were beaten badly, 120-101. It was a game in which the Rockets were in slow motion with their offense and just couldn’t guard anyone on a consistent basis.

Part of the growing up process for any team, is moving on from what transpired the previous game. Houston left Salt Lake City determined to perform much better on the road.

At times on Thursday, the Rockets looked like the better team, but other times played not to lose.

Once the Rockets got their act together they won a drama-filled game, a game they needed.

“It was fun,” Anderson said. “Just an intense game in a great atmosphere like that, those are games you’re going to remember when you’re an old man. Just high energy, make great plays, it was a great to see this team, resilient to the very end and keep fighting. We really just held onto the lead for the entire game, they fought back like they do. They made runs and we answered.”