Home / Regional / Dominica election 2022: Not my fault UWP has no leader, says Skerrit

Dominica election 2022: Not my fault UWP has no leader, says Skerrit 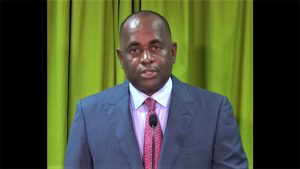 The ruling Dominica Labour Party continues with its election hustings even as the island’s opposition forces call for a boycott of the December 6 general election.

Addressing supporters in the Petite Savanne Constituency last night, Prime Minister Roosevelt Skerrit defended ringing the election bell early, stating it was not the first time this was done in Dominica. He pointed out that early elections also occurred in Barbados, Jamaica, St Lucia, St Vincent, in St Kitts and Nevis and many other commonwealth countries.

Skerrit accused the opposition forces of spending their entire time on radio and Facebook instead of visiting people in the constituencies.

“It is not my fault the UWP (United Workers Party) is not an organised party or do not have a leader or can’t find candidates to run for General Election in Dominica,” quipped Skerrit.

He told DLP supporters that the UWP is unable to put a team together because they have no leader.

The UWP’s interim leader is Senator Francisca Joseph, following the October resignation of Lennox Linton as political leader of the UWP.

The Prime Minister of Dominica said: “UWP as opposition is a government in waiting. When you are waiting you must be practising… getting ready so when the time comes to lead the country you would be ready to lead. If you cannot put a team of people together, how are you going to run the country?”

PM Skerrit also urged DLP supporters not to allow persons to besmirch the party’s name and let people believe they are doing wrong things in Dominica…” that the election tainted… we are having free and fair elections in the Commonwealth of Dominica.”

Because what they are seeking to do is undermine our country and what this country is doing for itself. I shall stand in defense of Dominica.”

Skerrit said he will not allow others to destroy the country.