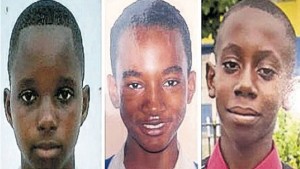 GUNMEN Wednesday descended to new level of depravity when they held up three teenaged boys and a 35-year-old man, told them to lie face down and executed them in the quiet Hayes community in Clarendon.

The brutal, heartless murders were committed at approximately 9:30 pm in the Moneymusk Housing Scheme, triggering islandwide shock and anger, and an immediate response from the police high command which launched an islandwide manhunt for the killers that has so far resulted in the capture of two suspects from the parish.

But even as the authorities were preparing to question the suspects they posted a $500,000 reward for information that could help them prosecute the killers.

“I want to assure you that we will leave no stone unturned in our search for those responsible,” Police Commissioner Carl Williams said as he visited the community and reached out to family members of the victims.

The words of encouragement from the police top brass were however not enough to silence the grieving mothers, whose cries could be heard on approach to the community, where residents mourned 14-year-old Raymond Givans, a student of Vere Technical High School; Ricardo Briscoe, also 14 years old, of Garvey Maceo High School; 16-year-old Alex Turner, who attended Central High; and Marquis Hamilton, a 35-year-old accounts clerk at the Sugar Company of Jamaica.

The Constabulary Communication Network reported that the three boys were walking along the road when they were pounced upon by two armed men who forced them onto Hamilton’s premises where they were gunned down.

Police yesterday theorised that robbery was the motive. However, residents gave another story.

The resident said the boys were walking home from a gym when they stopped in a section of the housing scheme to tap into an unsecured wireless Internet service.

“While they were sitting there, men came in the area and held them up at gunpoint,” said one resident.

Hamilton, who was sitting close to his house, was also held. The four were ordered to lie face down on the ground.

Minutes later the unthinkable happened. Sounds of gunfire echoed throughout the community. One source from the community said the gunmen, after carrying out the dastardly act, started running away but returned to the spot to ensure that the victims were dead.

Yesterday, Ann Marie Briscoe, mother of one of the victims, said from the moment she heard the shots she felt a pain in her stomach.

“I was in my house and I heard the gunshots rang out. Immediately I felt a pain. I took up my phone and called my son’s phone and it rang without anyone answering,” she said.

Minutes later, the mother said, she saw people running towards a section of the community.

“Oh God, help me go through this,” said the woman, who had to be consoled by residents.

Shock would turn to anger as she searched in vain for answers.

“Mi can’t believe mi son gone. Imagine, mi do everything to help the community and mi son come lose him life like this. There was no one to help,” the mother said.

One of her sons said he was among the group that ran to the spot. He said that when he saw his sibling lying by the side of the road he turned, walked away and then walked back to the spot to determine whether he was seeing right.

A group of women who gathered around the mother wept openly.

A stone’s throw away from the women, Hamilton’s common-law wife stood at the front of her house staring at the spot where he was killed.

In the distance, her son — who looked no more than four years old — stood in a corner unaware of what had happened to his father.

One of Givans’s relatives wept openly.

“Have mercy, can people be so heartless?” said the relative who was too afraid to give a name.

Meanwhile, a relative of Turner fought hard to conceal his pain as he remembered the youth as being jovial.

“He was a person who did not give trouble; he was always jovial,” said the relative who was also afraid to give his name.

Yesterday, Commissioner Williams called for residents to help the police in their search for the killers.

Officials from the Ministry of Education also visited the three boys’ schools.