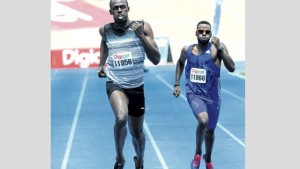 DOUBLE-sprint record holder Usain Bolt clocked a modest 46.38 seconds to win the men’s clubs and institution 400-metre run when he made a surprise appearance at the Digicel/ Lucozade Sport GC Foster Classic at the National Stadium yesterday.

Running out of lane four in heat one, Bolt was comfortable along the back straight and came of the curve ahead of the field to win ahead of his Racers Track Club teammate Edino Steele, who clocked 46.80 seconds. Former Calabar sensation Javon ‘Donkey man’ Francis, who clocked 46.49 seconds to win his heat, was second overall with Steele finishing third.

The 28-year-old Bolt, who was running the event for the first time in almost two years, told reporters that he was happy with the run.

“Overall it was a good run; I haven’t run it in the past two seasons, so for me to be actually competing again and getting a lot more running in is a positive thing (where) I can get back into shape, so I am happy with myself,” he said.

Meanwhile, the Digicel Grand Prix Championship series was brought to an exciting end with the 4×400-metre relays as St Elizabeth Technical High School (STETHS) and Edwin Allen High were both on the verge of taking home the top prize of $1 million each in gym equipment.

At press time it was STETHS leading the boys’ standings with 210 points, 74 points ahead of Calabar (136), with Jamaica College (122) and Kingston College (96), rounding off the top four.

The girls’ section was more closely contested as Central Champions Edwin Allen (111) were just ahead of Vere Technical (110). Wolmer’s Girls (101) and STETHS (96) completed the top four.

It was a ding-dong battle in the girls’ 4X400-metre open event, before Edwin Allen showed their class to pull away from the field to win in 3:36.67 minutes. Vere Technical were second in 3:37.04 minutes, while Holmwood Technical finished third in 3:40.10 minutes.

Earlier in the day, Twayne Crooks of Kingston College clocked a fast 45.93 seconds to win the boys’ 19 and under 400-metre Grand Prix final, ahead of Shawndail McLaren (47.77sec) of Jamaica College and Rogay Granston (47.99sec) of Holmwood Technical.

The girls’ 19 and under final was won by Alesha Kelly of Hydel High, who redeemed herself following a disappointing disqualification at the Carifta Trials for a lane infringement. Kelly won in 53.95 seconds ahead of Dawnalee Lonely (54.38sec) of Camperdown and Derri-Ann Hill (54.84secs) of Vere Technical.

Calabar’s prodigy Christopher Taylor was smooth in victory in the boys’ 17 and under category in 49.61 seconds, followed by Leonardo Ledgister (50.10secs) of St Elizabeth Technical and Achebe Thompson (50.12secs) of Excelsior High.

The girls’ 16 and under event was won by Shanice Walker of Vere Technical in 55.77 seconds with Satanya Wright (57.80sec) of St Elizabeth Technical and Janielle Josephs (58.49secs) of St Andrew Technical finishing second and third, respectively.

St Elizabeth Technical’s Nigel Ellis clocked a fast 21.07 seconds on his way to victory in the boys’ 19 and under 200-metre Grand Prix final ahead of teammate Hujaye Cornwall (21.12sec) and Shivanarine Small (21.42secs) of Kingston College.

The outstanding Dejour Russell of Calabar won the boys’ 17 and under event in an eye-catching 21.16 seconds, ahead of Tyreke Bryan (22.02sec) of Kingston College and Herbert Morrison’s Jadeja Reynolds (22.05sec).

Kashekia Cameron of Edwin Allen won the girls’ 16 and under category in 23.95 seconds, with Edwin Allen’s Khamoy Farquharson (24.27sec) and Shaunelle Riley (24.63sec) of Immaculate Conception taking the runners-up spots.