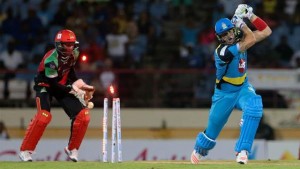 St Lucia Zouks were brilliant all-round, crushing the hapless St Kitts and Nevis Patriots by seven wickets on Wednesday night to win handily and atone for the disappointment for their first-game washout last weekend.

Playing in the fourth game of the Caribbean Premier League at the Beausejour Cricket Stadium, Patriots were restricted to 149 for six off 20 overs despite captain Marlon Samuels’ unbeaten 52.

And Johnson Charles then blasted an unbeaten 69 to propel Zouks to their target in the 16th over, to notch their first win after rain ruined their contest against Trinidad and Tobago Red Steel on Sunday.

Opting to bat first, Patriots slumped to 19 for four in the fifth over after fast bowlers Shannon Gabriel and Fidel Edwards wrecked the top order.

Gabriel, voted Man-of-the-Match, finished with three for 19 from his four overs while Edwards claimed two for 29, with the two combining to snare the first four wickets.

The slide started when Evin Lewis dragged on to Edwards in the second over without scoring with eight runs on the board and his opening partner Martin Guptill (14) was taken at short line leg by Kemar Roach off Gabriel in the following over with the score on 17 for two.

In the next over, Orlando Peters’ upper cut found Henry Davids’ safe hands on the third man ropes before he had scored and Patriots were in turmoil when Shane Dowrich clipped an ordinary delivery from Gabriel to Kyle Mayers at short mid-wicket to depart for two.

Samuels came to his side’s rescue, anchoring two key stands to see Patriots up to a respectable total.

The right-hander put on 78 for the fifth wicket with Devon Thomas who hit a run-a-ball 34 with a four and three sixes, and also added a further 50 in an unbroken seventh wicket stand with Pakistani Sohail Tanvir whose 26 came from 21 balls and included two fours and a six.

Samuels’ innings was invaluable, as he counted four fours and three sixes in his 37-ball stay at the crease.

However, any hopes of a Patriots victory were quickly erased as Charles and opening partner Andre Fletcher snatched the game away with an opening stand of 81 off 53 balls.

The right-handed Charles smashed three fours and five sixes off 44 deliveries while Fletcher, also right-handed, hit seven fours and a six in his 48 off 30 balls.

Zouks wobbled, however, losing Fletcher and Mayers (2) in successive overs in the space of five balls, to slip to 85 for two in the 10th over.

Kevin Pietersen entertained briefly with a two fours and a six in 18 off 12 balls before being bowled by off-spinner Nikhil Dutta at 120 for three in the 13th over.

But Charles saw Zouks safely home, dominating an unbroken 30-run, fourth wicket stand with New Zealander Ross Taylor who was unbeaten on four at the end.