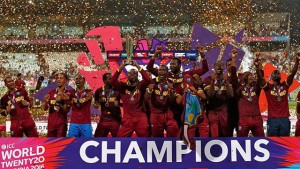 Carlos Brathwaite hit the first four balls of the final over for six as West Indies stunned England to win the World Twenty20.

Marlon Samuels’ 85 not out kept them in contention before Brathwaite’s match-winning blitz off Ben Stokes.

Joe Root scored 54 for England but nothing could stop the Windies joining their women as World T20 champions.

In the process, the West Indies also became the first two-time winners of the men’s World Twenty20.

Despite the devastating loss, England can take a lot of encouragement from their performance in this tournament, which has showcased an attacking philosophy and resilience that was completely lacking during their group-stage exit of last year’s 50-over World Cup.

But for Brathwaite and Samuels, it would have been Eoin Morgan’s side capping their rapid improvement with their own World T20 title.

Jonathan Agnew: “Most remarkable end to a superb final”

Stokes not to blame for defeat – Morgan

Sammy critical of West Indies cricket board after win

A thrilling final over

Brathwaite came in at number eight, joining Samuels at the crease in the 16th over with the West Indies on 107-6 and needing 49 from 27 balls.

The tall bowler had only batted twice in the competition prior to the final, scoring 10 not out against South Africa and 13 against Afghanistan in the group stages.

But, with 19 needed off Stokes’ last over, he seized his moment with the bat in spectacular fashion.

Stokes’ first ball – a half-volley on leg stump – is hammered into the stand behind deep backward square.

The second is hit down the ground and over long-on.

Brathwaite makes it three in a row with another big shot down the ground, this time over long-off.

The 27-year-old completes the victory with a fourth maximum, into the delirious crowd in the stand behind deep midwicket.

Brathwaite will take the headlines, but man of the match Samuels was the real architect behind the West Indies’ victory courtesy of his 66-ball unbeaten 85 – the highest individual score in a World T20 final, beating his own record of 78, scored in 2012.

He was brought to the crease in just the second over following the dismissal of Johnson Charles, who, along with fellow opener Chris Gayle, was one of two wickets claimed by surprise opening bowler Root.

Lendl Simmons, who scored a match-winning 82 in the semi-final against India in his first appearance in the competition, was trapped lbw by David Willey in the next over to leave the West Indies reeling.

Samuels was given a reprieve in the first over after the powerplay as replays of his edge from Plunkett showed it fell just short of Jos Buttler’s gloves, leading to the umpire calling him back to the crease after initially raising his finger.

But Samuels kept a cool head after this, scoring at around a run a ball to reach 50 and help his side to 86-3 before accelerating with two sixes and a four in a key 15th over from Plunkett.

Two wickets in the 16th over by Willey in the following over swung the game back England’s way, but Samuels remained to watch on from the non-striker’s end as Brathwaite turned the game decisively in the West Indies’ favour.

It was a cruel end to the game for Stokes, who had excelled in the field, taking four catches. He left the field in tears.

England also got off to a horror start in their innings, with Jason Roy bowled through the gate from just the second ball of Samuel Badree’s opening over.

Alex Hales (1) and captain Eoin Morgan (5) followed soon after as they faltered to 23-3.

This united England’s best two batsmen at the crease with plenty of overs to attack and Joe Root and Jos Buttler steadied the ship before taking the game to their opponent to forge the best partnership of the innings – 61 from just under seven overs.

However, Buttler fell just as he was looking to accelerate and Root was dismissed with just over five overs remaining as the pressure on his shoulders produced the first false shot of his innings – a mistimed, premeditated attempted scoop that gave a catch to short fine-leg Benn and Brathwaite the second of his three wickets.

Only Willey would make another notable contribution, hitting two sixes and a four in a quick-fire 21 to help England to their modest and ultimately insufficient total.

England captain Eoin Morgan: “It was filled with ups and downs. We let ourselves down with the bat and probably fell about 40 short.

“The decision to open the bowling with Joe Root came about in the last couple of days and golden arm took two wickets in his first over.

“Throughout this tournament we have shared a lot of good times but we are all in pain tonight. Ben [Stokes] plays all three formats, it will take him a while to come back but I have no doubts he will have a long career and do well in an England shirt.”

West Indies captain Darren Sammy: “This win is something we are going to cherish for a long time. We have 15 match-winners but nobody gave us a chance.

“We felt disrespected by our board, [commentator] Mark Nicholas described us as having no brains and all this brought us together. The ability to put adversity aside and to play this type of cricket is just tremendous.”

England head coach Trevor Bayliss: “If you add up the white-ball cricket games these guys have played, it’s a long way behind other teams. It’s a promising side and the signs are good.

“Whatever words I come up with the in the dressing room won’t be enough. They’re hurting, but it will steel them for the future.

“We have still got work to do, but we have a lot of good players to work with. England cricket is in good hands.”

BBC cricket correspondent Jonathan Agnew: “Four successive sixes to win, I have never seen that before. England looked absolutely crushed. It’s really good to see a smile on the face of West Indies cricket. It’s a unique brand of the game and it needs to be nurtured and encouraged.”

Former England spinner Vic Marks: “It was a staggeringly good final and a very good tournament. I feel desperately sorry for England who played so tenaciously to get back into the match, and especially for Ben Stokes. On the other hand you have to admire Brathwaite and the way he finished the game.”

BBC Test Match Special commentator Charles Dagnall: “An incredible tournament with an impossible end… Love T20. But feel for Stokes, like the penalty taker who misses in sudden death.”

The stats you need to know

This is the first time that both the men and women’s sides of one country have won the World T20 in the same year.

Dwayne Bravo has taken more T20 International wickets against England than any other player (12).

This is the first time Joe Root has taken more than one wicket in a T20 International innings.

India’s Virat Kohli has been named player of the tournament after scoring 273 runs at an average of 136.50.