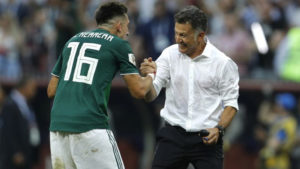 The chants rung out around the upper deck of Estadio Azteca. Juan Carlos Osorio claimed he didn’t hear them. But others did. For others in Mexico City on June 3, they were loud and clear.

Exactly two weeks before Mexico’s 2018 World Cup opener against Germany, thousands of El Tri fans were calling for their coach’s head. And they, the ones who made their feelings known during Mexico’s sendoff friendly, certainly weren’t alone.

Osorio had become an extremely unpopular figure in Mexico. His constant tinkering and experimenting was often pinpointed for blame after poor performances. The uncertainty it gave rise to, fans’ thinking went, was one reason Mexico wasn’t playing up to its potential.

But on Sunday, in the biggest game of his managerial life, Osorio got his vindication. And he leads our list of winners from Day 4 at the 2018 World Cup.

Winner: Juan Carlos Osorio
The flipside of Osorio’s game-specific tweaks is that they equip his players with plans tailored to a given foe. Osorio is one of the best in the world at crafting an approach that will neutralize an opponent’s strengths and exploit its weaknesses. And he’s especially great when he has seven months to do so.

That was the story of Mexico’s win over Germany. (That, and boatloads of passion, commitment, and willingness to suffer.) Osorio developed specific tactics over a span of many months to give his team the best chance to uproot the defending champs.

The plan was so detailed, so intricate. There were several wrinkles emblematic of its complexity. One: To clamp down on Germany’s attacking technicians, Osorio deployed three active midfielders who could shuttle back and forth, both vertically and horizontally, in front of the defense. Their responsibility was the space that Mesut Ozil, Thomas Muller and Julian Draxler liked to operate in.

That, seemingly, left room for Toni Kroos, the most technically-gifted passer in the world. But Osorio gave Carlos Vela a quasi-man-marking assignment, asking him to track Kroos all the way across the field if necessary:

If Kroos dropped into the left back position, Vela defended as a right winger, with Miguel Layun dropping back as a right-sided central midfielder or right wingback. If Kroos was central, Vela was in a No. 10 position, with Layun covering wide right. Osorio and Vela took Kroos out of the game.

Thus, Germany’s main route past Mexico was through wide channels. Joshua Kimmich, as always, was dangerous down the right. But Osorio also had a counter for this – literally. He used the aggressiveness of Germany’s fullbacks, and Kimmich’s especially, to his advantage.

With Germany in possession, Chicharito was often left one-on-two with Germany’s center backs. When Mexico won the ball, Chicharito would check to it. Vela, Layun and Hirving “Chucky” Lozano would explode into the spaces vacated by the fullbacks, or the defensive midfield space often left open by Kroos.

That’s why Mexico was so dangerous on the counterattack. And its potency was masterminded by the oft-maligned Osorio.

Loser: Mexico’s final-third decision-making
El Tri really should have had more than one goal. Because its transition scheme was sooo effective. But Chicharito, Lozano, Vela and others squandered countless 3-on-3, 4-on-3, or even 2-on-1 breaks.

Mexico held out for the victory. But it’ll have to be more ruthless and efficient with its chances to accomplish what it wants to accomplish in Russia.

Loser: Germany
German manager Joachim Low got outcoached by Osorio. German players got outplayed by their Mexican counterparts. It was a rough day all around. Center back Mats Hummels bemoaned his side’s tactical inferiority after the game, and seemed to be pointing an accusatory finger at the coaching staff:

Now, there are two sides to every story. There’s an alternate universe where Germany’s attackers hold possession better and combine for more goalscoring opportunities. In that universe, the position of the fullbacks isn’t a concern; rather, it’s a reason the Germans were so dominant on the ball.

That highlights why the Mexico defeat is no cause for panic about Germany as a team. The 2014 winners were simply undone on the day by a team that drew up and executed a fantastic plan to vanquish them. They’re still capable of repeating.

Germany is a Day 4 loser, however, because its slip-up put it on a collision course for a Round of 16 showdown with Brazil.

Loser: Brazil
That is, if the Brazilians win their group. Which they still should. But they themselves dropped two points in a 1-1 draw with Switzerland. They became the third of three pre-tournament favorites to fail to win their opener.

On the World Cup worry-o-meter, though, the Selecao have the least to fret about. They’ll be just fine. But even if they had won, they’d have been a Day 4 loser because of the prospect of that Germany clash on July 2.

That very prospect could actually make for some fascinating, backwards Matchday 3 scenarios. With Group E’s finales set to take place two hours after Group F’s go final on June 27, Brazil might have incentive to draw rather than win, assuming it would prefer a matchup with Mexico to one with Germany. But perhaps that’s thinking a bit too far ahead.

Winner: Switzerland
The Swiss got a massive result. They’ll now head into their Matchday 2 meeting with Serbia – which beat Costa Rica 1-0 – knowing a draw would keep them on course for the knockout stages – and, because of Group F upheaval, probably on course for a matchup with Mexico instead of Germany.