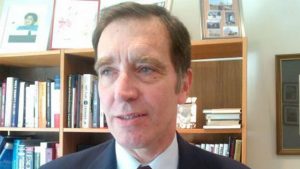 The World Bank’s Chief Economist for Latin America and the Caribbean Carlos A. Végh

Despite the recent impact of natural disasters, the World Bank says the Latin American and Caribbean region remains on course to record modest economic growth for the first time in six years.

The bank’s Chief Economist for Latin America and the Caribbean Carlos A. Végh issued the projection yesterday in the wake of two powerful category 5 storms, Irma and Maria, which devastated Anguilla, Barbuda, the British Virgin Islands, Dominica and St Martin last month.

With these islands currently struggling to get back on their feet, he said the Bank was still anticipating regional growth for 2017.

“After a growth slowdown that lasted six years (including a contraction of 1.3 per cent last year), the Latin American and Caribbean region is finally expected to resume positive growth in 2017, with market analysts forecasting real GDP (Gross Domestic Product) growth of 1.2 per cent for 2017 and 2.3 per cent for 2018,” Végh said in his presentation, entitled ‘Between A Rock and A Hard Place’, to the annual general meetings of the World Bank and International Monetary Fund in Washington DC.

However, he noted that the resumption of positive growth was mainly due to the recovery in South America, which is expected to grow by 0.6 per cent in 2017 and 2.2 in 2018 after two consecutive years of negative growth in which real GDP fell by 1.2 per cent in 2015 and 2.9 per cent in 2016.

“The region would not have the benefits of favourable external factors such as a buoyant global economy or a great demand for raw materials. This means that Latin America must boost its own growth and put its house in order – in some cases with difficult public spending and money management decisions,” he added.

The World Bank official also touched on the financial institution’s response to last month’s hurricane devastation. He revealed that the bank was in the process of finalizing assistance packages for Barbuda and Dominica which were hardest-hit.

In the meantime, Végh said the bank had disbursed US$23 million, US$20 million of which had gone to the relief efforts in Roseau.