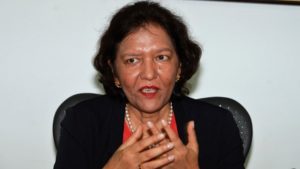 Addressing journalists during a recent visit to the island, Sayed said the development is positive.

She noted that several economists making presentations on the Caribbean at a recent World Bank conference in Miami, indicated that the regional states were capable of generating significant growth.

“At this point, we are looking at a two per cent growth trajectory, but the islands have the potential to generate much more… particularly as they are service-oriented economies (as against) commodity-based countries…for which it is going to be more challenging,” she pointed out.

Sayed gave an undertaking to lobby the World Bank Group’s support, particularly the International Finance Corporation, for Caribbean states’ macroeconomic policies, particularly relating to adopting and adhering to fiscal rules which she said Jamaica has “actually moved on”.

She cited tourism and youth skills training and employment as key areas for regional governments to focus on in the quest for higher economic growth.