Home / International / With abortion in jeopardy, America’s minority women have most to lose

With abortion in jeopardy, America’s minority women have most to lose 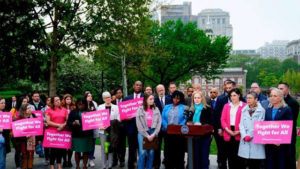 JACKSON, Mississippi (AP) — If you are black or Hispanic in a conservative state that already limits access to abortions, you are far more likely than a white woman to have one.

And if the United States Supreme Court allows states to further restrict or even ban abortions, minority women who already face limited access to health care will bear the brunt of it, according to statistics analysed by The Associated Press.

The potential impact on minority women became all the more clear on Monday with the leak of a draft Supreme Court opinion suggesting the court’s conservative majority is poised to overturn the landmark 1973 decision legalising abortion.

The draft decision is not yet final but it sent shock waves through the country. Overturning the Roe v Wade decision would give states authority to decide abortion’s legality. Roughly half, largely in the South and Midwest, are likely to quickly ban abortion.

When it comes to the effect on minority women, the numbers are unambiguous. In Mississippi, people of colour comprise 44 per cent of the population but 81 per cent of women receiving abortions, according to the Kaiser Family Foundation, which tracks health statistics.

Why the great disparities? Laurie Bertram Roberts, executive director of the Alabama-based Yellowhammer Fund, which provides financial support for women seeking abortion, said women of colour in states with restrictive abortion laws often have limited access to health care and a lack of choices for effective birth control. Schools often have ineffective or inadequate sex education.

If abortions are outlawed, those same women — often poor — will likely have the hardest time traveling to distant parts of the country to terminate pregnancies or raising children they might struggle to afford, said Roberts, who is black and once volunteered at Mississippi’s only abortion clinic.

“We’re talking about folks who are already marginalised,” Roberts said.