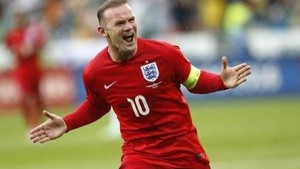 Wayne Rooney edged one goal closer to Sir Bobby Charlton’s record as England snatched a thrilling 3-2 win away to Slovenia to end the season unbeaten for the first time in 24 years.

England looked set to lose their first qualifying game since 2009 when Milivoje Novakovic put Slovenia ahead, but Jack Wilshere scored two fine goals to put the visitors in front. Substitute Nejc Pecnik thought he had grabbed a historic equaliser with six minutes to go, but less than two minutes later, Rooney capitalised on a defensive error and slotted past Samir Handanovic to score his 48th international goal.

The England captain is now level with Gary Lineker and one shy of Charlton’s 49-goal record. It was a historic evening for Roy Hodgson, too, who became the first England manager to guide his team through an unbeaten season since Graham Taylor did so in the 1990-91 season.