Winning on the road: Cavaliers hold off late rally to beat Kings 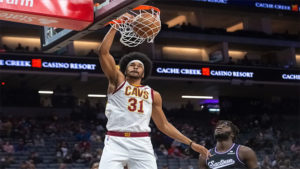 SACRAMENTO, Calif. — Jarret Allen had 18 points and 17 rebounds, Darius Garland also had a double-double and the Cavaliers held off the Sacramento Kings 109-108 on Monday night.

Kevin Love scored 19 points, Evan Mobley added 17 and Lauri Markkanen and Cedi Osman finished with 15 points apiece. Garland had 12 points and 11 assists and the Cavaliers completed the season sweep of the Kings.

“It’s a win so we’ll take it but it wasn’t our best,” Bickerstaff said. “We talk about playing with purpose and discipline for 48 minutes. We didn’t do that tonight. We can’t put ourselves in these type of positions. We have to improve because it’s going to cost us down the stretch if we don’t.”

Tyrese Haliburton had 21 points and eight assists for the Kings. Buddy Hield added 19 points. The Kings have lost a season-worst five in a row.

The Cavs led 109-99 with 2:34 remaining but went cold. The Kings went on their biggest run after that and got within 109-108 on two free throws by De’Aaron Fox. After the Cavaliers turned the ball over, Fox missed a 15-footer as time expired.

“We did all we needed to do to put ourselves in a position to win, We just couldn’t quite get over the hump,” Kings interim coach Alvin Gentry said. “If you tell me that I could get De’Aaron Fox a foul-line jumpshot to win the game, I’ll take that. If we play that way night in and night out we’ll change the direction of our team.”

The Cavaliers led going into the fourth quarter, fell behind by three, then went on a 14-2 run to take a comfortable lead. Mobley, quiet for most of the evening, made two baskets during the run then later made a three-point play to make it 106-99. Markkanen followed with a 3-pointer before the Kings made their late push.

“The message today was to come back how we were two weeks ago,” Allen said. “We were rebounding the ball, protecting the paint, doing everything that made us a good team. It was a huge step in the right direction.”

Coming off a season-low two points in Sunday’s 96-82 loss to Golden State on Sunday, Love got the Cavaliers going early and had 14 points in the first half including a 3-pointer that put the Cavs ahead by 12.

The Kings got within 47-45 on Marvin Bagley III’s dunk but Garland made a 3-pointer atop the arc for the Cavs and Osman followed with two free throws. Osman later scored on a reverse just before halftime to make it 62-49.

Lamar Stevens scored six of the Cavs’ first 11 points in the third quarter and fed Allen with an alley-oop pass but Hield made back-to-back 3s then added a third beyond the arc to help the Kings cut their deficit 84-79.

Cavaliers: Allen had his double-double before halftime.