Windies women gearing up for revenge 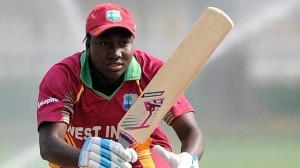 BASSETERRE, St Kitts – West Indies women cricketers say they are on the hunt for revenge when they play New Zealand in a One Day and T20 international series starting in St Kitts this weekend.

All-rounder Stafanie Taylor says the regional outfit is back to full strength and has a score to settle with the white ferns after receiving a mauling earlier this year.

The first of four ODIs takes place at Warner Park on Friday while three T20 matches will be contested at Arnos Vale Cricket Ground in St Vincent later this month.

“We take the series very seriously, given that we lost all our games against them in New Zealand,” said Taylor.

“We are therefore looking forward to it where we hope to do the same of winning both series.”

The West Indies were without star batters, Taylor and Deandra Dottin, due to injury and suspension, respectively, when they suffered heavy defeats to New Zealand this year.

They were trounced three-nil in their three match one-day series and lost a five match T20 series four nil with one of the matches finishing in a no-result due to rain.

“We are stronger now than before,” said Taylor in reference to the make-up of the regional women.

“We know it’s not going to be easy, as they are a good team with good players.”

“But all we have to do is to just stick to the basics, tick all the necessary boxes, and do what we did best against them here in the Caribbean.”

Uncapped Barbadian all-rounder Hayley Mathews was this week named on a 13-member squad which also saw the return of all-rounder Britney Cooper, Dottin and Taylor.