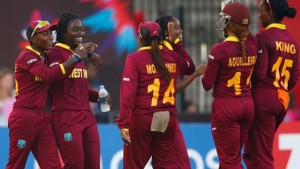 KINGSTON, Jamaica – West Indies Women levelled the five-match series 2-2 after completing an improbable comeback to defeat England by 42 runs on Sunday in the fourth One-Day International at Sabina Park.

After winning the toss and choosing to take first strike, the West Indies made a competitive 223-6 off their allotted 50 overs. Captain Stafanie Taylor top-scored for the hosts with a polished knock of 84 runs. Shaquana Quintyne and Merissa Aguilleira contributed 41 and 32, respectively.

Pacer Natalie Sciver took 1-14 for the England team that was guilty of putting down no fewer than four chances.

In reply, England Women, who at one stage were cruising at 133-1, were bowled out for 181 inside 45 overs. There were five run-outs in their innings.