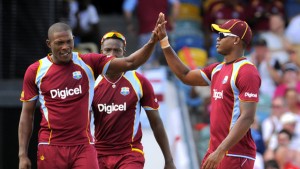 In the latest rankings, the Windies were still mired in the bottom end of the standings on 94 ratings points but just two behind Pakistan. Their position comes on the backs of a heavy 4-1 hammering at the hands of South Africa in the recent one-day series in South Africa.

Their last one-day series prior to the South African tour was the ill-fated campaign in India that was abandoned after four matches, after players quit because of an unresolved contracts dispute with their union, WIPA. They were trailing 2-1 in that five matches series.

West Indies will hope for a turnaround in their fortunes when they open their World Cup campaign against Ireland on February 16th in Group B, which comprises the likes of defending champions India, South Africa, Pakistan, Zimbabwe and United Arab Emirates.

They are currently in Sydney preparing for the showpiece that runs from February 14th to March 28th. Meanwhile, Australia will start the tournament in top spot; six ratings points clear of India, with South Africa lying third.