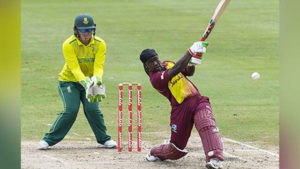 BRIDGETOWN, Barbados (CMC) — West Indies were not at their best but still brushed aside South Africa by 17 runs here yesterday, as they began their final preparation for the defence of their Twenty20 World Cup title in November with a comfortable victory.

Choosing to bat first at Kensington Oval, the hosts stumbled their way to 124 for six off their 20 overs but then restricted the Proteas to 107 for seven, to take an important 1-0 lead in the five-match T20 series which now moves to Trinidad for the remaining games.

Natasha McLean top-scored with 38 off 41 balls to snatch the Player-of-the-Match award in her first appearance for West Indies in three years, while all-rounder Deandra Dottin chipped in with 22, but the remainder of the batting flopped.

West Indies lost 20-year-old Hayley Matthews cheaply for eight in the fourth over when she sliced seamer Zintle Mali (2-24) to Laura Wolvaardt running back at cover.

McLean, who struck four fours, posted 28 for the third wicket with captain Stafanie Taylor (9) but the partnership was a sluggish one requiring 32 balls, leaving the Windies stalling at 52 for two at the half-way stage of the innings.

Taylor, still seeking her best form, fell in the 10th over bowled by off-spinner Saarah Smith, missing a heave at a full-length delivery.

When McLean perished in the 12th over, also bowled by Smith playing a loose cross-batted shot, West Indies were going nowhere at 63 for three.

Dottin arrived at number five to strike two fours in a 19-ball knock and help her side pass three figures.

In reply, only Marizanne Kapp, who top-scored with 30, and skipper Chloe Tryon with 23, showed any resistance as off-spinner Taylor (3-16) and leg-spinner Afy Fletcher (2-17) hurt the innings with key strikes.

In fact, South Africa were set back as early as the fourth ball of their run chase with just two runs on the board when Lizelle Lee top-edged a pull at a short ball from fast bowler Shamilia Connell, for McLean at mid-on to take a simple catch.

And her partner Wolvaardt followed her soon afterwards in the fourth over for eight, missing a charge at Taylor and going stumped by Merissa Aguilleira.

Tryon threatened with two fours and a six in a 16-ball knock but was one three wickets to tumble for 35 runs, leaving the South Africans tottering on 66 for five in the 14th over.

Kapp, who belted two fours and a six in a breezy 22-ball innings, then attempted a rescue mission in a 40-run, sixth-wicket stand with Faye Tunnicliffe (14).

But that partnership too was a slow one lasting 39 balls and by the time Taylor bowled Kapp in the final over, the game was long gone.