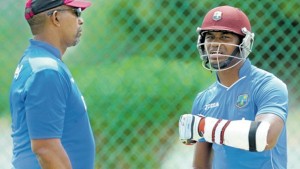 ST JOHN’S, Antigua (CMC) — West Indies appear set to launch a passionate challenge against England when the two sides meet in the first of a three-Test series here today.

The West Indies have vowed to play “exciting and attacking cricket” in an all-important highstakes series which begins at the Sir Vivian Richards Stadium in Antigua.

Denesh Ramdin’s men, under the guidance of new head coach Phil Simmons, are also eager to keep intact their record of not losing against England in Antigua.

“We have a young team and we will come out and play exciting and attacking cricket. It will be a tough series with some hard days on the field, but we are ready for the hard work. We are fully prepared,” Ramdin said.

“I would like the team to go out and play competitive, exciting cricket. We know the opposition is a very good team… we need to do the basic stuff which is important…when we get out to bat try and spend time at the crease.”

The West Indies wrappedup their preparation with a full training session yesterday morning at the Sir Vivian Richards Cricket Ground. Both teams are in hot pursuit of redemption following a woeful campaign in the recent World Cup.

The experienced wicketkeeper/batsman noted that the team’s preparation camp went well and a tough hard series against the visitors on home soil is expected. “We know they have a very good bowling line-up, so we are not going to give away any freebies,” said Ramdin.

“We are pushing ourselves a lot more now.

A lot of youngsters are coming through. New faces that the English don’t know about.” The new faces include uncapped players, batsman Shai Hope and fellow Barbadian, fast-bowling allrounder Carlos Brathwaite. However, a number of leading players are unavailable for various reasons including Chris Gayle, Darren Sammy, Dwayne Bravo, Kieron Pollard, Sunil Narine, and Lendl Simmons.

The regional team is expected to depend heavily on Ramdin, Darren Bravo, Marlon Samuels and 40-yearold Shivnarine Chanderpaul.

“We had a do with the governor general, Sir Rodney Williams, and they were saying they wanted to beat us 3-0,” said England captain Alastair Cook after a reception with Antigua and Barbuda governor general. “They’re here to fight and we’ve got to expect, as I kept calling it, a war.

We know we’re in for a hell of a battle.”

The once-mighty West Indies have propped up the ICC’s lists, above only Bangladesh and Zimbabwe, for the better part of two decades.

A repeat of their hardfought 1-0 triumph, the last time the teams met in the Caribbean six years earlier, would be a timely boost in Phil Simmons’ debut as head coach.

“My cricket philosophy is that you practise hard, play easy.

That’s the way I look at it,” said Simmons, the former West Indies all-rounder, who took over the top job last week. “We have to be doing things a lot harder in practice, which makes things easier when we get on the field.”

West Indies and England last met in the Caribbean in 2009 with the home side taking that close series one-nil. While England are favourites to win the series, West Indies, like their opponents, are hoping the short series will be a major turning point after an unsuccessful run.

“I think they are going to come hard at us,” predicted Ramdin.

“So we need to prepare for that and put our backs against the wall and do something special here.”