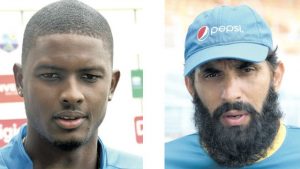 The stage has been set for a historic encounter and a performance to match the occasion will be high on the agenda of the West Indies and Pakistan teams when they square off in the opening Test match of Brighto Paints presents Q Mobile Cup Test Series at Sabina Park today.

First ball of the monumental game, which is the 50th Test to be contested at the venue, as well as the 50th Test between the two teams, is scheduled for 10:00 am daily (11:00 am Eastern Caribbean Time).

The last Test meeting between the two teams ended with Pakistan taking 2-1 honours in three-match series in the United Arab Emirates (UAE) in October last year.

And the dominance of the Pakistanis over the regional outfit continued earlier this month when they swept the four-match Twenty-20 series 3-1, followed by a 2-1 series win in the three-match one-day internationals (ODIs).

However, the tables turned briefly over the past week as a gritty President’s XI team proved a handful for the touring Pakistanis. West Indies captain Jason Holder is optimistic of a similar display from his side.

Leeward Islands batsman Kieran Powell is set to feature in his first Test after a three-year absence, as he along with uncapped Guyanese batsmen Vishaul Singh and Shimron Hetmyer have been included in the 13-man squad.

Notably absent from the West Indies line-up is marquee batsman Darren Bravo, who was the second-highest scorer in the Test series against Pakistan in October, due to the continuing impasse with the WICB.

“Well, we finished off the year quite well last year. we won that game in Sharjah (UAE) and we batted well and we also got 20 wickets. In the past, we have been able to get 20 wickets, but we haven’t been able to consistently put runs on the board and that’s one area that we obviously need to pay attention to,” Holder told journalists yesterday.

“We stress on consistency; one thing we talk about in the dressing room is momentum, and if we have the momentum we need to hold out as long as possible and not shift it back to the Pakistanis. So for us it’s just to get runs on the board for the first innings and our bowlers will support us in the field,” he added. For Pakistan Captain Misbah-ul-Haq, who will be playing his final Test series ahead of retirement, it is an occasion to go out with a bang.

“It is always important if it’s your first series or your last series. I think you want significant contributions from your point of view and you want as a batsman to prove a point all the time throughout your career, especially when you play in the last series. So it’s important that you just stand up for the team and contribute heavily,” Misbah noted.

However, having seen glimpses of potential in the current West Indies squad, Misbah is leaving nothing to chance.

“I think you have to go step by step, and looking at the Test side especially with the notice in the UAE, they played really well, the West Indies.

“They got promising youngsters and they just played against us even in the side (warm-up) game and it is going to be challenging for us. they are a good side at the moment… pretty inexperienced, but they are developing into a good side so we have to be at the top of our game,” he ended.