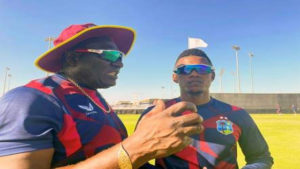 KINGSTON, Jamaica (CMC) — West Indies will chase a series win when they face Ireland in the rescheduled second One-Day International here Thursday, even as the threat of COVID-19 continues to hover ominously over the three-match series.

The Caribbean side pulled off a 24-run win in Saturday’s opener at Sabina Park but three COVID cases in the Ireland camp 24 hours later, forced Cricket West Indies to postpone the second ODI which had been carded for Tuesday.

With no further positive tests in the intervening period, the headlines appear ready to be made on the field and bowling coach Roddy Estwick said it was critical West Indies remained focussed amidst the off-field disruptions.

“COVID has been with us now for nearly two years and obviously there are going to be disruptions, we know that,” he told an online media conference here Wednesday.

“I thought we had a very good preparation today (Wednesday). The boys looked focussed — obviously it’s a much younger team and people are willing to share knowledge and to find out more and having more discussions,” noted Estwick.

Ireland lost key batsman Paul Stirling to COVID before the side left Florida where they played a three-match Twenty20 series against United States, and then had Simi Singh and Ben White ruled out when they tested positive before the first ODI here.

Captain Andy Balbirnie, who top-scored with 71 in Ireland’s failed pursuit of 270 in the first ODI, was one of the three to test positive following the game, along with wicketkeeper Lorcan Tucker and interim head coach David Ripley.

Untouched by the virus, however, West Indies dominated on the field, racking up 269 last Saturday courtesy of half-centuries from debutant Shamarh Brooks (93) and captain Kieron Pollard (69).

And fast bowlers Alzarri Joseph and Romario Shepherd then put the finishing touches on the result with three-wicket hauls, despite Balbirnie’s effort and Harry Tector’s 53.

In spite of the win and the strides made in some areas, Estwick said West Indies were still anxious to improve on their opening performance.

“One of the things [we tried] was to minimise the dot balls [when we batted] — there’s no secret that we need to improve on that,” he explained.

“But obviously the pitch here in Jamaica, especially in the first innings, the ball seamed around quite a bit in the morning so we were prepared not to lose too many wickets and then push on at the back end and I thought we did that well for the first 10 overs.”

Estwick continued: “I think the running between the wickets has gotten better … so there are encouraging signs but we know the areas we need to improve on so we’ve got to continue to work on [them]. “

Though Ireland have lost key players to COVID, Estwick warned his side against complacency.