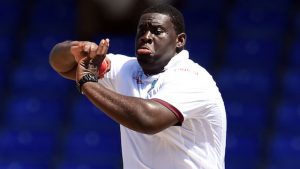 DAMBULLA, Sri Lanka (CMC) – A dramatic batting collapse ensured a series defeat for West Indies A as they plunged to 138-run loss on the last day of the third and final four-day “Test” against Sri Lanka A on Friday.

Set a target of 333 for victory, the Caribbean side were cruising at 108 for two before losing their last eight wickets for just 86 runs to crumble for 194 all out, at the Rangiri Dambulla International Stadium.

Captain Shamarh Brooks top-scored with 46, Kieran Powell got 44, while his opening partner, Rajendra Chandrika stroked 30. But it was leg-spinner Jeffrey Vandersay who had the final say, claiming six for 47, to wreck the innings.

Sri Lanka A had earlier declared their second innings on 257 for six, after resuming from their overnight 211 for five.

Roshen Silva, unbeaten at the start on 29, made 44 off 97 balls while Dasun Shanaka converted his overnight seven into 33 not out off 76 deliveries with five fours.

They stretched their sixth wicket stand to 65 before being separated when fast bowler Keon Joseph prised out Silva to finish with two for 30.

Powell and Chandrika then gave the visitors a bright start by posting 63 for the first wicket.

The left-handed Powell faced just 41 balls and struck seven fours and a six in a cameo knock while Chandrika was more patient, consuming 93 deliveries and counting a single four.

When Powell was lbw to left-arm spinner Lakshan Sandakan, Shimron Hetmyer helped add another 25 for the second wicket with Chandrika.

He had made a breezy 18 off 16 balls with four fours when he perished at 88 for two and his dismissal triggered a slide where three wickets fell for 36 runs as Chandrika and left-hander Vishaul Singh (6) also fell in quick succession.

Stumbling on 124 for four, West Indies A were pulled around by a 47-run, fifth wicket partnership between Brooks and wicketkeeper Jahmar Hamilton who made 25.

The right-handed Brooks faced 75 deliveries and struck five fours while Hamilton spent 61 balls at the crease and hit a single boundary.

The decline started when Brooks and Rahkeem Cornwall (0) fell off successive deliveries to Vandersay to leave Windies A on 171 for six, and the end came swiftly as the last four wickets tumbled for 10 runs.

West Indies A will turn their attention to the three-match one-day series which bowls off on Monday.