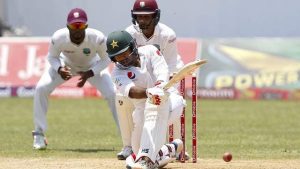 West Indies’ brittle and unproven batting was brutally exposed by leg-spinner Yasir Shah, leaving the Caribbean side staring at yet another Test defeat following a chastening penultimate day of the opening Test against Pakistan yesterday.

Trailing on first innings by 121 runs after Pakistan piled up 407 all out, West Indies were in strife at 93 for four in their second innings at the close – still requiring 28 runs to avoid an innings defeat on Tuesday’s final day at Sabina Park.

They were cantering at 72 for one at one stage but that false sense of security was unveiled as three wickets fell for 17 runs in the space of 39 balls as Yasir wreaked havoc on the innings to finish with four for 33.

Left-hander Kieran Powell missed out on a well-deserved half-century when he fell for a fluent and composed 49 while debutant Shimron Hetmyer chipped in with 20 before his demise.

Starting their innings after tea, West Indies reached 22 before losing their first wicket when Kraigg Brathwaite played back to the first ball of Yasir’s spell and lost his off-stump for 14.

Powell and Hetmyer then combined in a 50-run second wicket stand to raise the Windies hopes of entering the final day in a strong position.