White House Press Secretary: Those ‘Against’ Trump Deserve to Be Called ‘Human Scum’ 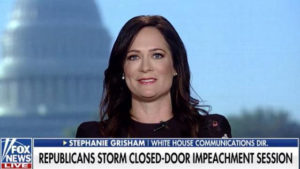 White House Press Secretary Stephanie Grisham on Thursday doubled down on her boss’ “human scum” attack on so-called “Never Trump” Republicans and seemingly expanded it to include anyone who has worked against President Donald Trump’s agenda.

“The Never Trumper Republicans, though on respirators with not many left, are in certain ways worse and more dangerous for our Country than the Do Nothing Democrats,” Trump tweeted on Wednesday afternoon.“Watch out for them, they are human scum!”

The president’s tweet set off a firestorm about the his rhetoric—in this case about a notably small subset of Republicans, some of whom are likely to vote for him anyhow—and so Fox & Friends host Brian Kilmeade asked the top White House flack, “Does he regret that?”

She continued: “It is horrible that people are working against a president who’s delivering results for this country and has been since day one. And the fact that people continue to try to negate anything he is doing and take away from the good work he is doing on behalf of the American people, they deserve strong language like that.”