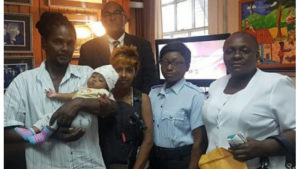 Attorney Nigel Hughes and relatives of Carl Mangal, who was jailed for ganja possession

While many nationals from the CARICOM nation of Guyana took to social media this week to express outrage over the three-year jail sentence of a poultry farmer there, who was found with 8.6 grams of marijuana, news broke that another African country has moved to legalize marijuana for medical and scientific purposes.

Zimbabwe has become the second African country to legalize the herb with the country’s health minister, Dr David Parirenyatwa, stating in a government notice that individuals and businesses would now be able to apply for licenses to cultivate cannabis for medicinal or scientific use.

Recreational use will remain illegal.

Applicants for the licenses must submit detailed plans of their proposed production site and yield, according to the government notice published in the Harare Herald on Saturday. Individuals applying for licenses must be Zimbabwe citizens or residents or have a waiver issued by the minister.

Meanwhile, in Guyana, Carl Mangal could spend the next three years of his life in jail if his appeal fails while the laws there continue to penalize many for minor possession of the herb.

The Alliance for Change (AFC) Party, in a statement, has once again called for an upgrade of the laws of Guyana to ensure that custodial sentences for small quantities of marijuana are removed in their entirety.

AFC Member of Parliament, Michael Carrington, said that since 2015, had tabled a bill in the National Assembly for debate, but it has since been languishing on the order paper, being deferred time and time again.

This as the country’s Prime Minister, Moses Nagamootoo, was quoted as saying that he believes marijuana penalty laws must be reviewed to address the number of young people being locked up.

“I share the view that Guyana should review sentencing guidelines, and liberalize laws that make custodial sentencing mandatory for small quantities of marijuana,” Nagamootoo stated. “Too many of our young people are in jail as the law, as is, provides for imprisonment for quantities above 5 grams and does not give magistrates a discretion.”