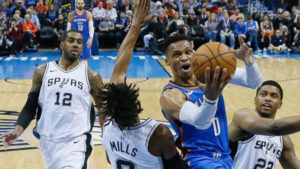 It was for 37-year-old forward Nick Collison.

Westbrook, the NBA’s most valuable player last season, scored 21 points and posted his 19th triple-double of this season to help the Oklahoma City Thunder defeat the San Antonio Spurs 104-94 on Saturday night. Collison, a fan favorite who has been with the Thunder since the team moved from Seattle, stole the show.

Collison heard the chant and got a kick out of it.

“Sometimes, I feel like the walk-on in college games,” he said.

Westbrook was glad to see Collison show he’s still got it. Collison hadn’t scored as many as seven points in a game since scoring seven on March 22, 2017, against Philadelphia.

“He puts in the work and he’s always ready to go,” Westbrook said. “Tonight was one of those nights where he got his number called and he answered like he does every time. It’s a blessing to be on the floor with a guy like him. He’s so unselfish. It’s good to see.”

Collison said he just tries to remember that he could be needed at any time. This time, it came in a key matchup between teams that are in the running for the No. 3 seed in the Western Conference.

“There has been a couple years for me where I haven’t played much,” he said. “I’m just trying to focus when I’m out there on what is actually going on. Trying not to let it get into my head too much that I haven’t been out here in a long time — really just focus on the play in front of you. I’ve gotten better at that as I’ve gone on. You just have to stay ready.”

Westbrook had 12 rebounds and 10 assists in the 98th triple-double of his career. Jerami Grant scored 15 points, Corey Brewer added 12, Paul George and Alex Abrines each scored 11 and Patrick Patterson had 10 for the Thunder, who improved to 6-3 since the All-Star break.

Rudy Gay and Davis Bertans each scored 14 points for the Spurs, who have lost eight of 10.

“They were very aggressive,” Spurs coach Gregg Popovich said. “They did a good job. He didn’t have one of his best nights, that’s for sure, but his effort was great. It just didn’t work for him tonight, and OKC was a big part of that.”

Brewer’s corner 3-pointer in the closing seconds of the first half gave the Thunder a 52-43 lead. He led Oklahoma City with 10 points before the break.

Thunder center Steven Adams came down hard on his left ankle early in the third quarter and did not return. Without his presence on both ends of the floor, the Spurs quickly took advantage and cut Oklahoma City’s lead to 62-58. The Thunder recovered after a timeout and led 77-68 after three quarters.

Collison took over in the early part of the fourth quarter. He made a reverse layup to make it 82-70, drew the fifth foul on Aldridge with 7:41 to play, then scored in close a minute later to give the Thunder an 89-72 lead.

The Spurs cut their deficit to seven with about two minutes to play, but Westbrook later clinched his triple-double on an assist to Grant for a 3-pointer that put the Thunder up 12.

Spurs: F/C Pau Gasol started after sitting out against Golden State on Thursday with a right shoulder injury. … F Kawhi Leonard remained out while recovering from a right quadriceps injury.

Thunder: G Terrance Ferguson was out with a concussion he received when he ran into Adams on Thursday against the Phoenix Suns.

“I think the biggest thing to me was the emphasis on moving the ball and letting the ball find the open man,” Donovan said.

On several occasions, Popovich played a lineup of players who all were at least 30 years old. Manu Ginobili, Tony Parker, Danny Green, Gay and Gasol add up to a combined 173 years old. Green, the youngster of the group, turns 31 in June. Ginobili, the elder statesman, is 40.

Spurs: at the Houston Rockets on Monday.