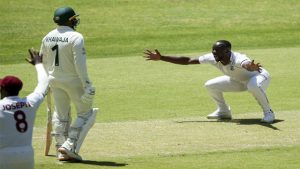 Marnus Labuschagne hit a brilliant century Wednesday to give Australia early control of the first cricket test against the West Indies on the opening day at the Perth Stadium.

Australia were 293-2 in 90 overs at stumps after winning the toss with Labuschagne and Steve Smith unbeaten on 154 and 58 runs, respectively.

On a first-day pitch that was uncharacteristically soft, opener Usman Khawaja (65) and Labuschagne showed great discipline in compiling a 142-run second-wicket stand to set up the innings.

Labuschagne then followed that up with an unbroken 142-run stand with Smith after the pair resumed on 162-2 after the tea break. Following a slow start to the day when lunch was taken at 72-1 in 29 overs, the third-wicket pair scored freely against an attack that was tiring in hot conditions.

Smith played the most entertaining innings of the day and raced to his half century off 75 balls, hitting six boundaries.

Labuschagne has batted for 364 minutes and hit a six and 16 fours off 270 balls.

“Scoring a test hundred anytime is amazing,” Labuschagne said of his innings. “To be able to do it in the first test of the summer can hopefully set you up for this game but also the summer.

After losing opening David Warner (5) as early as in the fourth over, Khawaja and Labuschagne weathered some testing and at times hostile pace bowling by the West Indies quartet over 3 ½ hours before Khawaja fell.

Khawaja nursed Labuschagne through the early stages of the innings, but once settled, Labuschagne dominated the partnership and outscored his senior partner.

Labuschagne cut fast bowler Jayden Seales through covers for his 13th boundary to bring up his eighth test ton in his 29th test and making the venue his favourite.

He has back-to-back centuries here as test cricket returned to Perth for the first time since December 2019 following the COVID-19 pandemic that forced the Western Australian borders to close for domestic and international visitors.

In the corresponding test three years ago, Labuschagne scored 143 and 50 against New Zealand in Australia’s 296-run win.

In fact, it was Labuschagne’s second century in the space of three innings following his 104 and 32 against Sri Lanka in Galle in July this year.

Labuschagne on 140 had a nervous moment seven overs before stumps when he cut Seales with the second new ball, and the ball fell perilously short of a diving Tangenarine Chanderpaul at deep point.

Labuschagne was also dropped on 132 when wicketkeeper Joshua Da Silva failed to collect an edge off part-time spinner and captain Kraigg Brathwaite.

Khawaja, Australia’s prolific run-getter in 2022, fell to an outstanding delivery from Kyle Mayers and edged to wicketkeeper Joshua Da Silva after 3 ½ hours.

Khawaja, 35, took his run tally to 953 at an average of 95.3 in 2022, including four hundreds and as many fifties in just eight test matches. Playing in his 52nd test, Khawaja’s 149-ball innings was punctuated with five boundaries and a massive six as he stepped out and deposited offspinner Roston Chase over long-off.

Warner, who hooked Seales for the first boundary in the fourth over of the innings, immediately bottom edged a delivery to give the tourists an early breakthrough.

West Indies capped Chanderpaul, the son of former batting great Shivnarine, for his first test. Chanderpaul, 26, a lefthander like his father, will open the batting for the tourists.

West Indies allrounder Raymon Reifer has been ruled out of the series with a groin injury.

The West Indies players wore black armbands as a tribute to former test wicketkeeper David Murray, who died this past weekend at the age of 72.

It is the first test between the two sides in seven years. The second test, a day-night game, will be played in Adelaide beginning Dec. 8