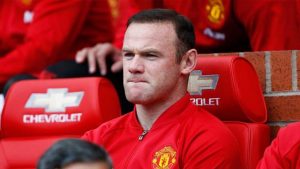 At age 30, Wayne Rooney is no longer good enough to play for Manchester United in the Premier League.

Frankly, Rooney is a captain without a position on United because he is simply not good enough to play anywhere on the park at this point in his career. That reality, however harsh, was hammered home on Saturday at Old Trafford in the Red Devils’ convincing 4-1 victory over defending Premier League champion Leicester City.

With Rooney left out of the starting lineup, Juan Mata got to play in his natural No. 10 role for the first time this season. As United’s prime playmaker, Mata was everywhere against Leicester and scored his second goal of the season, one more than Rooney.

On that goal (the only one that didn’t come off a corner kick), Mata moved from the left side, to the furthest man forward, to the right side and to the middle of the park, where he was playing deeper than central midfielder Paul Pogba. He linked up with the Frenchman on a give-and-go type of run, but Pogba’s return chip found Jesse Lingard, who managed to get a clever touch to get the ball back to Mata for the finish.

Man United boss Jose Mourinho, when he was in charge of Chelsea, famously sold Mata to United in 2014 under slightly suspicious circumstances. Mata joined the Blues as a central playmaker in 2011 and won the club’s player of the year award in 2012, when it won the FA Cup and the Champions League. He also received Chelsea’s top individual honor in 2013 before Mourinho came back to Stamford Bridge and moved him to United.

Because of that past transaction, most observers predicted a quick summer exit for Mata. But the 28-year-old arguably has been Manchester United’s best player this season, while Rooney has been by far the most criticized player in the team – and with cause. Some pointed to teenage sensation Marcus Rashford as the reason Rooney was left out of the starting XI, but that simply wasn’t the case. The reason was Mata.

Even in instances where he lost the ball on Saturday, Mata immediately pressured the ball with enough gusto to collapse any possible advantage resulting from his errors. The only consistent criticism leveled at the Spaniard has been his tracking ability and his defensive effort, but the way he fought for the ball out of possession in the first half, one could not criticize his defensive effort. In any case, Mata reacted exponentially more positively to his turnovers than Rooney tends to do and had far fewer crucial turnovers than Rooney puts together in his outings.

The funny part of all this is that United’s purchase of Henrikh Mkhitaryan from Borussia Dortmund expected to be the catalyst for Rooney’s eventual demotion. Mkhitaryan, though, has struggled with fitness, so Mourinho continued forward with Rooney until United stumbled to three straight defeats. After Rooney failed to score against lowly Northampton in the English Football League Cup on Wednesday and looked like one of the weaker players on the pitch, the Portuguese manager put out his best team against Leicester City, with Mata as the No. 10 and Rooney on the bench.

Anyone who followed Mkhitaryan at Dortmund will laugh at the thought of Rooney keeping the Armenian out of the team. In effect, United has two No. 10s that are considerably better than Rooney in the vital role. At some point, Mkhitaryan will surely make that fact abundantly clear. Heck, even Pogba would be a better option than Rooney in that role.

So where can Rooney play?

At striker, Zlatan Ibrahimovic is clearly the top choice. However, one would definitely take the 18-year-old Rashford and probably pick Anthony Martial over Rooney should the Swede miss games via suspension or injury. Rashford is a teenage sensation, while Martial joined the club as the most expensive teenager in the history of the sport, with the contract costing up to an estimated 60 million pounds (about $80 million).

As the fourth best striking option and the fourth-best No. 10 option, Rooney no longer deserves to play in either role for Manchester United. But Rooney playing as a winger is even more laughable. The England captain isn’t quick enough on either side of the ball to play on the wings. Rooney may be able to put in a cross, but to say that he should be the man out wide serving balls in is a joke.