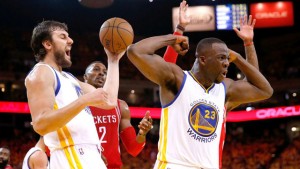 OAKLAND, Calif. — After a generation of wishing and waiting, the Golden State Warriors have finally arrived on basketball’s biggest stage again.

Stephen Curry had 26 points and eight rebounds, Harrison Barnes added 24 points and the Warriors advanced to the NBA Finals for the first time in 40 years with a 104-90 victory over the Houston Rockets on Wednesday night.

“Why not us?” Curry said to a roaring, golden-yellow shirt wearing crowd after the Warriors received the Western Conference trophy from Alvin Attles, the coach of their last championship team in 1975.

The Warriors shook off a slow start and sweated out a shaky finish in Game 5 to close out the Rockets and set up a matchup with LeBron James and the Cleveland Cavaliers beginning June 4.

It was hardly the prettiest performance — but one they’ll savor nonetheless.

Yellow streams and confetti fell from the rafters when the final buzzer sounded. The Warriors shared hugs and handshakes, and the crowd chanted “M-V-P!” for Curry.

He relished the moment on the court with his 2-year-old daughter, Riley, who joined him in his postgame news conference — laughing, playfully interrupting him and walking around the room again.

“I think she’s taking advantage of the moment for sure,” Curry quipped.

Dwight Howard led Houston with 18 points and 16 rebounds. But MVP runner-up James Harden had a forgettable finale, with a playoff-record 13 turnovers and 14 points on 2-of-11 shooting.

“Tried to do a little bit too much and turned the ball over and gave them easy baskets in transition,” Harden said. “This isn’t where we wanted to end at. It’s a really good season for us. Next year we want to be better, and we will.”

It was a tough way for the Rockets’ run to end. They overcame a knee injury that sidelined Howard half the season to finish second in the West, played without starters Patrick Beverley and Donatas Motiejunas in the playoffs and rallied from a 3-1 deficit to beat the Los Angeles Clippers in the second round.

The Warriors were one obstacle Houston couldn’t clear.

“The guys fought hard,” Rockets coach Kevin McHale said. “One thing about the team is that they were battlers, and a lot of guys in that room you feel pretty comfortable going to war with.”

Curry said he had no lingering effects from his frightening fall in Game 4 that left him with a bruised head and right side. The MVP wore a protective yellow sleeve on his right arm, which he shed in the third quarter after shooting 4 for 12 and the Warriors clinging to a 52-46 halftime lead.

Things got tougher on Curry and the Warriors when backcourt mate Klay Thompson faked a shot that drew Trevor Ariza in the air early in the fourth quarter. Thompson absorbed Ariza’s knee to the side of his head, sending him to the floor.

Thompson, who finished with 20 points, lay on the ground for a minute before walking to the locker room. He came back to the bench after receiving stitches on his right ear.

The Warriors initially said Thompson could’ve returned after passing a concussion test. The team said he began not feeling well after the game and started to show concussion-like symptoms. He will continue to be evaluated.

The Warriors did just fine without him, starting the fourth on a 13-4 run and holding off Houston’s last-ditch efforts on free throws.

Barnes highlighted the decisive spurt with a dunk that gave Golden State an 87-72 lead with 7:10 remaining. He flexed his muscles to the sellout crowd of 19,596, which spent the final quarter on its feet in anticipation of a long-awaited celebration.

King James vs. the Baby-Faced Assassin.

The four-time NBA MVP vs. the newly crowned MVP.

The hype has already started for two of the most popular and entertaining players in the world to take center stage for the championship, and it has a week to build even more before starting at rowdy Oracle Arena.

The conference title is the biggest accomplishment yet in what has been a rapid rise for a Warriors team that is beloved in the basketball-united Bay Area despite decades of futility.

Lacob and co-owner Peter Guber, sitting courtside next to rapper Kanye West, have turned the franchise into a contender since they bought the team in 2010. General manager Bob Myers, the NBA Executive of the Year, has constructed a talented roster around Curry that has exceeded all expectations. And first-year coach Kerr blended it all together beautifully after Mark Jackson’s messy firing last May.

“I always think of Pat Riley’s great quote when you’re coaching in the NBA, `There’s winning and there’s misery.’ And he’s right,” Kerr said. “It’s more than relief. It’s joy. Our players are feeling it. I know our fans are.”

Jackson watched the celebration from the ESPN table at center court, saying on the broadcast he was proud.

The Warriors rolled to a franchise-record 67 wins in the regular season and had little trouble dispatching New Orleans, Memphis and Houston in the playoffs. Now they’re in the finals for the first time since winning the title in 1975 behind Rick Barry and coach Attles, who enjoyed the game sitting in his usual spot at the top of the arena’s lower bowl.

Rockets: Howard and Bogut were called for double technical fouls in the second quarter. It was Howard’s seventh technical foul of the postseason, meaning he would’ve been suspended if there was a Game 6. … The Rockets last won at Oracle Arena on Dec. 13, 2013.

Warriors: Golden State is 46-3 at home this season, including 7-1 in the playoffs. … The Warriors are 16-2 in close-out games at home, the best winning percentage of any team.

The Warriors and Cavaliers split two games this season, with each winning on its home floor. James sat out Golden State’s 112-94 win on Jan. 9 in Oakland, and he scored a season-high 42 points in the Cavs’ 110-99 win in Cleveland on Feb. 26.