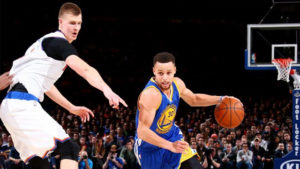 Never mind that it banked in, a rather ugly look on a team that shoots it beautifully.

“It sparked the run, didn’t it?” Green said. “It got everybody going by an amazing shooter.”

And the Warriors didn’t slow down the rest of another awesome third quarter.

Klay Thompson scored 26 points and Stephen Curry had 14 of his 21 in the period, when Golden State ran another opponent off the floor on its way to a 125-111 victory over the New York Knicks on Monday night.

Kevin Durant added 22 points and nine rebounds for Golden State, which trailed by one at halftime before outscoring New York 39-18 in the third to end things early.

The Warriors improved to 3-0 since the All-Star break and beat the Knicks for the eighth straight time, one shy of their longest winning streak in the series. They won nine straight in 1963-64.

A night shy of the five-year anniversary of Curry’s 54-point Madison Square Garden masterpiece, the Warriors showed how many weapons they have around him now, making 15 3-pointers and putting six players in double figures.

The third quarter has been when the Warriors separate themselves from opponents, and this was the seventh time they outscored a team by 20 or more in the period.

“I still don’t have an answer as to why the third quarter is what it is, like anything specific, beyond just the fact that we can wear teams down over the course of 48 minutes,” Curry said. And it might take 24, 26 minutes to really create that separation and gain that momentum, and we come out of the halftime with some juice, some energy and it’s winning time. So that’s my best explanation for it and hopefully it continues.”

This onslaught started innocently enough, with Green banking in a 3-pointer. Curry and Thompson followed with much prettier ones, and when JaVale McGee followed with a basket it was an 11-0 start to the second half and a double-digit lead in about 2 1/2 minutes.

The highlight show continued from there, with center Zaza Pachulia dribbling behind his back to lead a fast break and Curry converting a four-point play for a 20-point bulge later in the period.

“It’s tough. Those guys were so big and athletic, anyone in their team could switch,” the Knicks’ Tim Hardaway Jr. said. “So it was tough to get around them.”

Emmanuel Mudiay scored 20 points and Trey Burke had 18 for the Knicks.

Mudiay had 13 points in the first seven minutes and 14 in the first quarter to lead all scorers and give the Knicks a 39-37 edge.

Warriors: Rookie Jordan Bell returned after missing 14 games with inflammation in his left ankle. He had three points. … Green’s technical assessed with 1:04 left in the first half of Saturday’s rout against Oklahoma City was rescinded by the NBA on Monday, putting him back at 14 for the season and two away from an automatic suspension.

Knicks: F Michael Beasley received five stitches for a cut on his right eyebrow after he was hit in the second quarter but returned to play in the third. … New York is off until Friday, when it visits the Los Angeles Clippers to open a four-game road trip.

Curry’s 54-point game is still his career high, as he went 11 for 13 from 3-point range. The Knicks ended up winning it though, as Raymond Felton blocked his jumper to lead to J.R. Smith’s tiebreaking basket with 1:10 left in a 109-105 victory. That remains New York’s last home win over Golden State.

Knicks coach Jeff Hornacek, on the challenge of defending the Warriors:

This story has been corrected to show that this was the seventh time the Warriors have outscored a team by 20 points in the third quarter.

Check out the team sites for the Golden State Warriors and the New York Knicks for more game coverage.