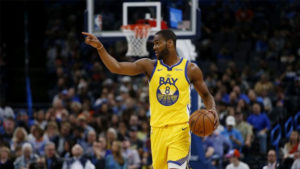 Tuesday was a day of wins both metaphorical and literal for the Golden State Warriors.

Early in the day, the injury-laden team learned that big men Kevon Looney and Alen Smailagic were cleared for basketball activities. Both are expected to spend some time in the G League on their way to returning to the Warriors.

Burks led the way with 29 points, eight rebounds and two assists, while Robinson III tallied 20 points. Burks, who played for a whopping four teams in the 2018-19 season, is averaging 13.5 points per game in his eighth year in the league.

Rookie Eric Paschall added 17 points, as did Marquese Chriss off the bench.

Draymond Green led a dominant defense that put up 10 blocks and held Ja Morant to a team-high 20 points. Green also appeared to avoid serious injury after taking a hard fall on his elbow.

He returned after that fall donning a padded arm sleeve and came just two points shy of a triple-double in the end (eight points, 10 rebounds and 11 assists).

“It’s huge. Losing sucks,” Kerr said of finally getting a win. “We lose seven in a row and it’s miserable. The thing we try to do as a staff is get the guys to keep working and believing in what we’re doing.”