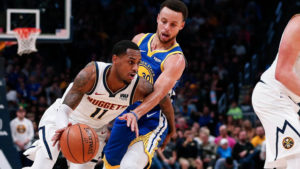 Playing in big games has become the norm for the Golden State Warriors.

Not so much for the Denver Nuggets.

The winner of Tuesday’s game in Denver will sit atop the conference standings. Denver (29-13) has been up there for a while now, but the Warriors (29-14) might yet find another gear in the second half of the season as they pursue a third consecutive NBA championship.

They are about to get a new, big piece when DeMarcus Cousins returns this week.

The center, who signed a one-year deal in the summer, tore his Achilles almost a year ago. His season debut is projected to come on Friday at the Los Angeles Clippers. Golden State is expecting it will take time for Cousins to get fully immersed and integrated into the offense.

“We’re excited, but it’s a little daunting, too,” Warriors coach Steve Kerr said in the San Francisco Chronicle. “It’s not going to be simple just to plug him in. There’s going to be an adjustment period. He knows that, but it’s a fun challenge.”

The Nuggets have a big enough task stopping Golden State’s other stars. Guard Steph Curry, a two-time league MVP, hit 11 3-pointers in a 48-point effort to beat Dallas on Sunday, and then there’s Kevin Durant, Klay Thompson and Draymond Green to worry about.

And the Warriors have a revenge factor to use. The Nuggets beat them 100-98 in Denver on Oct. 21 when Juancho Hernangomez blocked Damian Jones’ layup at the buzzer.

The Nuggets have been playing at a high level lately, especially at home, where they are 18-3 and have won their last 12. The latest was a grind-it-out 116-113 victory over the Portland Trail Blazers on Sunday, which might have been a perfect tune-up for the Warriors.

Denver has its own star power in center Nikola Jokic and guard Jamal Murray. Jokic, averaging team-highs with 19.7 points and 10.2 rebounds per game, had consecutive triple-doubles last week and then clocked in with 40 points, 10 rebounds and eight assists against Portland.

With or without Cousins, Golden State will have a tough time handling the Serbian. But the Warriors are best when they force teams to adjust to them, and they come at teams from different angles. One night it could be Curry, the next Durant. When tuned in, Golden State is hard to beat.

The Nuggets are ready for the challenge after getting everyone’s best this season.

“As teams give us their best shot because we’re No. 1 in the West right now, everybody gives the Warriors their best shot,” said Murray, who is averaging 18.5 points. “We just know we have the home court, and we beat them last time here.”