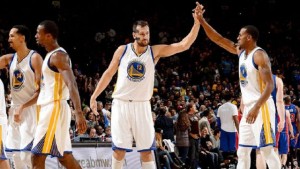 OAKLAND, Calif. — After winning yet another game, this time a 109-95 victory over the rugged Detroit Pistons, Golden State Warriors interim coach Luke Walton made a bold statement: “Our second unit is, we feel, the best in the NBA.”

What a change from the recent past. In the season before coach Steve Kerr’s arrival, the Warriors’ second unit performed horribly, seemingly squandering a point per every breath an exhausted Stephen Curry exhaled on the bench.

To the public, the Warriors are defined by the “Splash Brothers,” a vision-blurring 3-point shooting assault on the senses and all opponents. Internally, they’re defined by a different mantra: strength in numbers.

Perhaps a bromide, but it’s the deeply felt founding message of the Kerr-era Warriors. Before it adorned fan T-shirts, the phrase was a central theme of a Marv Albert-narrated video that Kerr showed the team in his first preseason as coach. Monday night was a reminder that, for all Curry’s brilliance, not every Warriors win redounds to his genius. This is also a team composed of unselfish veterans, some working fewer minutes than they would get elsewhere.

Draymond Green explained the team’s selfless ethos, saying, “That was really why they made that decision for Andre to come off the bench and make the bench more solid.” He also affirmed Walton’s comment, adding, “I definitely think we got the best bench in league.”

As Green delivered his statements, he was working on another side project: getting almonds out of his Jordans. Andre Iguodala, aforementioned bench anchor, had weighed down Green’s shoes with the dry little drupes, presumably as a prank. Iguodala, as savvy a vet as you’ll find, has a hand in all things Warriors. He runs the bench like an orchestra conductor, gesticulating wildly and often to get his teammates in their proper places. Though he puts much of himself into steering the bench, he would not boast about the process. On Walton’s “best bench in the league” assessment, the typically self-effacing Iguodala replied simply, “Nah, he lying.”

Monday might have called for some Steph relief, partially on account of Detroit’s Kentavious Caldwell-Pope playing brilliant defense on the MVP (Curry finished with 7-of-18 for 22 points, five assists and five turnovers). The Pistons were in the game, down only four with 9:33 remaining and Curry getting a needed rest. It was at that point a lineup of Iguodala, Livingston, Leandro Barbosa, Harrison Barnes and (surprise sub) Andrew Bogut suddenly ran away with victory, slapping 10 points onto the lead in roughly two minutes. The Pistons reserves couldn’t score against the gnashing defense of Bogut, Iguodala and Livingston. On the other side, fluid offensive movement sprung Barbosa and Barnes. Barbosa had a key sequence (a difficult layup, a 3 and a pressure steal) in the bench’s push. After the game, Curry remarked on how they had nicknamed Barbosa “The Layup King,” for his creative finishes around the rim.

This early in the season, it’s hard to know whether Walton, as Iguodala contends, is indeed lying. What’s demonstrably true is that Golden State’s bench was superior to a Detroit unit led by Aron Baynes and Steve Blake on Monday — crushingly so. Same as last year, the Warriors bench is a collection of mostly wise veterans who know and accept their roles. They benefit from an unusual continuity, as most second units are prone to disruptive roster shakeups from year to year.

There also is a possibility that the bench improves in a different way: Monday saw Bogut return from concussion in a reserve role, where he played quite well. Walton has said Bogut is likely to eventually rejoin the starters, but he hasn’t ruled out going a different route. That is speculation for now, but it would be an intriguing evolution for a roster that has stayed stable. Whatever the choice, the Warriors are in an enviable position: They have the MVP — and a lot of support when he sits.