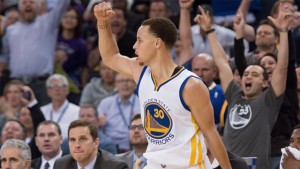 Warriors guard Stephen Curry celebrates after a play against the Lakers during the fourth quarter.

OAKLAND, Calif. — When the Golden State Warriors made the playoffs two years ago, then-coach Mark Jackson got teary eyed just talking about the accomplishment and

Now the Warriors have their sights set so high they barely even recognize the feat.

Curry congratulated his teammates in a brief postgame speech, but there was no celebration this time.

“Why celebrate now and sell yourself short?” said Warriors forward Draymond Green, who added 16 points and eight rebounds. “Continue to reach higher and higher. Maybe that’s where we were a year ago or two years ago, but now we expect (to make the playoffs).”

The Warriors sealed their postseason berth during a timeout late in the second quarter when they learned Oklahoma City lost 119-115 at Dallas. The videoboards above halfcourt displayed “CLINCHED,” and fans inside the sold-out arena gave the home team a standing ovation.

Players just glanced up and played on.

“This is a great sign that the players are taking it in stride. It means that this franchise has come an incredibly long way the last few years,” said first-year coach Steve Kerr, who didn’t even know the team could claim a playoff spot Monday until a public relations official told him just before the game.

The Warriors have made the playoffs in three consecutive seasons for the first time since 1975-77 and are trying to finish with the NBA’s best record.

Golden State (52-13) has a 6½-game lead over Memphis for the top spot in the Western Conference. The Warriors welcome East-leading Atlanta (53-14) to Oracle Arena on Wednesday night.

The Lakers (17-49), who have tormented Golden State for most of the last three decades, are the team trying to climb out of the Pacific Division cellar now. Los Angeles kept the game close but never overtook the Warriors in the final minutes as they were overmatched and outmanned.

“Losing is losing. There are no moral victories,” Lakers coach Byron Scott said. “We’ve been playing a lot of teams like this.”

The Lakers tied the game at 95-all on Jordan Hill’s hook shot with 4:42 remaining.

Thompson quickly answered with a 3-pointer, then Curry tossed a behind-the-back pass to Andre Igoudala for a dunk. Thompson followed with a layup to put Golden State up 102-95.

Los Angeles rallied within one, and the teams traded free throws in the final seconds — the Lakers fouling intentionally, and the Warriors playing aggressive and not wanting their opponents to attempt a tying 3-pointer.

Green finally finished the Lakers off by deflecting the ball off Wesley Johnson for a turnover.

Jordan Clarkson and Wayne Ellington each scored 17 points, Johnson added 16 and Hill had 15 points and 12 rebounds for the Lakers, who have lost eight of nine.

Lakers: Reserve swingman Nick Young had a CT scan on his swollen left knee, which has forced him to miss the last 11 games. Scott says the team expects to release results Tuesday. … Los Angeles is 7-26 on the road.

Warriors: Golden State has won 16 in a row at home against Western Conference opponents. … The Warriors are a league-best 30-2 at home. It’s the seventh time in franchise history they’ve won at least 30 games at home. The franchise record is 36, set in the 1975-76 season.

Scott said he didn’t understand why Curry was awarded two free throws to start the fourth quarter. He said the referees told him the Warriors were in the bonus late in the third quarter when Curry was fouled and should’ve been given two free throws.

“It just boggles my mind,” Scott said. “I guess they can just review the things that they want to review.”

Golden State got a brief scare when Thompson turned his right ankle awkwardly as he stepped on Tarik Black’s foot in traffic in the third quarter. The All-Star shooting guard had his ankle re-taped in the locker room and returned in the fourth to help the Warriors find their form.

Thompson had his ankle in a bucket of ice after the game. Neither Thompson nor Kerr thought the injury was serious. Thompson will be re-evaluated Tuesday.