Warner Leads Australia to Victory with Century Against South Africa at Warner Park in St.Kitts 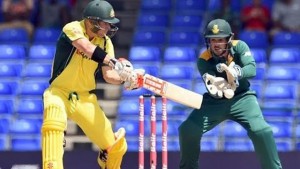 David Warner suffered a finger injury while fielding during Australia’s 36-run win over South Africa in St Kitts, a result inspired by his first ODI ton on foreign soil.Warner, Australia’s leading run-scorer in the ongoing tri-series who also dominated the recent Indian Premier League, continued his stellar form in a knock of 109.

The vice-captain excelled at the beautiful and improved Warner Park, where Australia finished 6 for 288 thanks also to half-centuries from Usman Khawaja and Steve Smith. Josh Hazlewood then starred with the ball as South Africa, cruising at 2 for 177 in the 32nd over, were all out for 252 in 47.4 overs.

Smith’s team now top the tri-series table, having banked two wins from three games. The tournament continues on Tuesday, when Australia face hosts West Indies at the same venue. Warner may miss that match, with team management to assess the finger injury that forced him off the field during the Proteas’ chase.

Defending the total on a small ground was always going to be tricky and South Africa looked far too polished for much of the night. Wicket of De Villiers proves turning point Hazlewood worked tirelessly to remove Quinton de Kock and Hashim Amla but his dismissal of AB de Villiers proved the game’s turning point.

De Villiers was clean bowled by a ball that nipped in late, leaving the Proteas at 4 for 210 with 79 runs required from 73 deliveries. Young legspinner Adam Zampa stepped up in a tense finish, grabbing three wickets and creating a chance that James Faulkner put down at point.

Mitchell Starc dismissed Faf du Plessis, who top-scored with 63, and mopped up the tail with the help of a one-handed screamer from substitute fielder Glenn Maxwell. The victory was sealed with a collapse of 7 for 42 but set up by Warner’s first ODI century against the Proteas.

The opener’s dig was more class than crass, the sort he has churned out with increasing frequency over the past year. Warner could easily have been seduced by the venue’s short straight boundaries.

Instead he hammered only two sixes from 120 deliveries, stroking 11 fours and regularly scuttling through for ones and twos. It was exactly what stand-in coach Justin Langer would have hoped for after Australia were rolled for 142 in last week’s loss to the same opposition in Guyana. The dismissal of Warner, who cracked an unthreatening ball straight to Amla at midwicket in the 35th over, prompted a slump of 3 for 33.

In the absence of Maxwell, dumped after failing twice in the series, it was Smith and Matthew Wade who rallied late. Smith, who opted to bat and revealed three changes at the toss, finished 52 not out from 49 balls. Wade contributed a quick-fire 24.