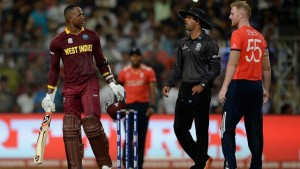 “Badass” is a word often thrown around lightly. Not for Marlon Samuels. Having won his second Man of the Match award in World Twenty20 finals, Samuels came for his press conference still in his pads. The England press conference was on when he arrived, and he sat and waited, accepting congratulations from those working in the media centre. About five minutes had gone by when he finally lost patience, and inquired when the thing would start. He had come without the West Indies media manager and he was going to do things media managers lose their jobs for.

Finally Eoin Morgan left the press conference room. They didn’t look at each other. Samuels walked in. Sat sideways because he was wearing pads, and couldn’t stick his legs under the table. The ICC representative, who was going to coordinate the press conference, tried to explain to him the cameras were in front. In a heaving room, though, Samuels had the audience on side. Without moving his head, he looked at the cameras and asked, “Are you ready for me?” No one objected. They’d be damned if they objected to him.

And then, just to make himself more comfortable, Samuels placed his feet on the table, spikes and all. The ICC representative tried to talk him out of it. Samuels just wanted to be comfortable. He had played some of the most gorgeous straight drives under immense pressure just minutes ago. Surely nobody minds him not giving the cameras the perfect angle. The ICC records this press conference on a camera just to the right or the left of the player. All it is likely to have got is the spikes talking. And the words stung more than his scorching hits.

There is history between Shane Warne and Samuels. During a BBL match in January 2013, Samuels seemed to have grabbed Warne’s Melbourne Stars team-mate David Hussey as he turned for a second run. Warne indulged in some shirt pulling when Samuels came out to bat. Then a Warne throw from close range whizzed by Samuels’s face after which Samuels threw away his bat in anger.

Warne the commentator has also not been very complimentary of Samuels, who doesn’t like it. When accepting his Man of the Match award, Samuels said he had only Warne on his mind when he woke up, and – following criticism of his dismissal against India in the semi-final – that he knew he would turn up for the final. Then he displayed his trophy to the cameras and said, “This is for Shane Warne.”

At the press conference he laid into Warne some more. “Every team I play for, Shane Warne has a problem with me,” Samuels said. “I don’t know what, I’ve never disrespected him, it seems he has a lot inside him that he needs to come out with. I don’t appreciate the way that he continues to talk about me, and the things he keeps doing. I don’t know, maybe it is because my face is real and his face is not.”

Ben Stokes, who also has some history with Samuels, came in for stick as well, after their ongoing tussle through the final. Samuels was waiting for the third umpire to rule on a catch – eventually he was given not out – when he and Stokes had a word. Once the umpires confirmed Samuels was to come back, he gave Stokes an angry word or three. After the match was won, Samuels removed his jersey and rushed across to be in front of the England dressing room to gesticulate. He was later fined 30% of his match fee by the ICC for “abusive and offensive language” directed at Stokes.

“Stokes is a nervous laddie,” Samuels said when asked of his chat with Carlos Brathwaite before the last over, off which West Indies needed 19 to win. Brathwaite hit four consecutive sixes to win the match with two balls to spare. “So what I tell Braithwaite is to just hold his pose, and he’s going to bowl a couple of full tosses, as always, and it will work in our favour. And he played a brilliant knock at the end there to give me a little break down at the other end.”

Stokes came in for further anger. “Well, he doesn’t learn,” Samuels said. “They keep telling him when he plays against me, do not speak to me because I’m going to perform. I didn’t even face a ball and he had so much to say to me that I know I had to be right there at the end, again.”

Samuels said that the needling kept him going. “That’s what I thrive on,” Samuels said. “That’s why I’m still around for so long, despite so much ups and downs. I’ve turned my life around in the last five years, and I wake up every day and give thanks to god and to my kids, this is what I am doing for them.”

For some inexplicable reason the press conference was ended abruptly at six minutes. Samuels wanted to talk more. He asked for more questions. At this moment he was laying into everything that moved. The ICC representative, though, put his foot down. Perhaps it was Samuels’ posture, perhaps it was the lack of political correctness. They might want to control him off the field, but on the field Samuels couldn’t be controlled on the night.