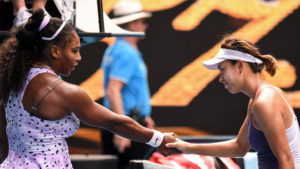 She also ended Serena’s quest for history in Melbourne, where the American was seeking to lift her 24th Grand Slam title – a feat that would tie the all-time record, currently held by Margaret Court. Serena’s last Grand Slam title came here in Melbourne in 2017; since giving birth to daughter Alexis Olympia later that year, Serena has gone on to contest seven Slams and reached the final on four occasions, but that 24th major crown remains elusive.

For Wang, the win was a dose of revenge – and perhaps redemption. The last time these two played, Serena needed just 44 minutes to rout a subdued Wang at the US Open, dropping just 15 points to win 6-1, 6-0.

She acquitted herself well on Friday, staying calm under pressure and firing 25 winners past Serena, breaking the former World No.1’s powerful serve three times en route to a 6-4, 6-7(2), 7-5 victory.

“I’m really happy now, still happy,” Wang grinned in her post-match press conference. “I always believe I can do this one day. But I don’t know which day, but it’s coming today.

“I really happy to see it happens. I did really hard work in off-season, so [this] is pay.”

Wang was fired up from the start against Serena, dictating play with her laser-honed backhands and keeping Serena running from end to end. It took the former World No.1 a few games to warm up, but as soon as she did Serena opened up three break chances at 2-3, but the Chinese player held firm.

But Wang was more consistent, forcing errors off of the Williams racquet and eventually breaking to love at 5-4. That lone break proved to be decisive, and Wang served out the opening set with confidence.

Serena was points away from being out of the tournament in the second set, as Wang went up a break at 3-2 and closed in on the finish line. Wang served for the match at 5-4, but Serena dug deep to extend her stay in Melbourne and level at 5-5. Wang had two more break chances at 6-5, but Serena slammed the door finding some powerful first serves to send them into a tiebreaker. The No.8 seed dominated in the decider, reeling off the last four points in a row to send them into a third set.

Wang stayed calm as the tension ratcheted up on Rod Laver Arena, with Serena on the other side of the net looking ready to pull off another trademark comeback. She kept Serena under pressure with her strong serves and heavy groundstrokes, and the American’s unforced error count continued to climb – she totaled 56 to Wang’s 20 by the end of the match.

“[To] play against her, she’s a really aggressive player,” Wang said. “You cannot be only passive. You have to stay with her.

“I just tried to be more aggressive, but not aggressive than her, but just try to be my aggressive way. For me, this match is a really aggressive match. She [plays] more winner than me, but that’s the way she plays.

“I think she miss a lot today. I think that’s the point.”

After two break point chances in two games came and went for Wang, both players were locked into a tense battle in the third set. Finally it was Wang, on the eve of Chinese New Year, who took her chances at the most crucial time, breaking on her third match point to win, 6-4, 6-7(2), 7-5 in two hours and 41 minutes.

“She served well. I didn’t return like Serena,” Serena assessed in her post-match press conference. “Honestly, if we were just honest with ourselves, it’s all on my shoulders. I lost that match. So it is what it is… I can’t play like that. Like, I literally can’t do that again. That’s unprofessional. It’s not cool.”

“I just made far too many errors to be a professional athlete today,” she added.

Into the fourth round at the Australian Open for the first time, Wang will take on Tunisia’s Ons Jabeur, who defeated the retiring Caroline Wozniacki, 7-5, 3-6, 7-5 earlier in the day to advance.