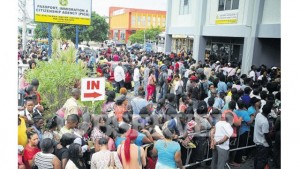 Hundreds of customers gather yesterday at the front of the passport office to process their documents before a May 26 rise in application fees that was later pushed back to June 1.

MAYHEM erupted yesterday at the office of the Passport, Immigration and Citizenship Agency (PICA) in St Andrew as a crowd attempting to have passport applications processed before a fee increase deadline swelled to an uncontrollable level.

The mad rush triggered several stampedes during the day, one of which left at least two children injured.

“The children were injured as things got out of hand and frustrated customers tried to push their way into the institution,” a customer, claiming to be an eyewitness to the incident, told the Jamaica Observer.

After implementing a quota of 1,000 applicants per day on Tuesday, PICA was yesterday forced to push back the deadline for the implementation of the increase to Monday, June 1.

“The decision to delay the implementation of the increased fees follows the overwhelming turnout of persons applying for passports before the increased fees take effect,” Chief Executive Officer of PICA Jennifer McDonald admitted to the Observer.

PICA officials also said that the daily quota was removed and the processing of applications moved to the National Indoor Sports Centre next door to the National Stadium.

“Effective next Tuesday, May 26, through to Friday, May 29, PICA will accept and process passport applications at the National Indoor Sports Centre starting at 6:00 am daily,” McDonald said.

The decision by PICA officials to reschedule the date, however, did little to ease the anger of many customers who said they felt frustrated.

“Right now we feel cheated and abandoned based on what happened here today, we feel disappointed; the matter could have been dealt with much better,” said Neville Williams, a Kingston resident, who said he was at the PICA office from 5:00 am.

Adrian Reid, another customer, said that she felt PICA should have implemented more measures to cater to the large turnout of customers.

“They made the announcement, that means they must have anticipated the massive turnout. They should not have waited till last minute,” said Reid.

Sheldon Smith was also angry, but said he felt relieved that the authorities allowed “good sense to prevail” and decided to push back the deadline.

The situation was particularly challenging for Ross Andre Dormer, a student who visited the passport office from 3:00 am and was seen sleeping on a car as he was forced to wait for more than 10 hours for his parents to process documents.

Meanwhile, Leader of the Opposition Andrew Holness yesterday visited the Constant Spring Road office and met with PICA officials as well as frustrated customers who openly voiced their disappointment with events that unfolded.

Holness said he has been advocating for changes to the pending increase by writing to the Prime Minister and visiting the PICA office.

“While we are heartened that at least the people’s demand for an extension has been considered, we believe that a review of the new rates is necessary as the desperate crowds that have been seen at the offices are a clear and compelling indication that the people will not be able to afford the new rates when they take effect,” the Opposition leader said.

Holness added that he felt that the agencies should show more respect for their customers — the Jamaican people — by improving how they project, announce and implement increases.

“No efficiently run business could throw a 40 per cent increase on customers and survive. Essential Government services shouldn’t act this way just because they think they can. It is not right.”