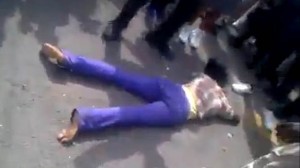 ST JOHN’S, Antigua – The police and the Ministry of Education are calling on residents to assist in the criminal probe of a video depicting a young girl being beaten into an unconscious state by three other girls who were dressed in partial school uniforms.

In the video, posted last Friday on the Facebook page ‘Troll Antigua’, a number of onlookers, dressed in several local identifiable school uniforms, formed a ring around those engaged in the fight and were spurring on the attackers.

A number of persons in the video appeared to be taking photographs and making videos, while others, who were screaming “fight”, kept the circle tight to prevent the victim from escaping.

The beating, which included punches to the victim’s head, pulling of her hair and stomping/kicking her side and back, only ceased when she was no longer moving and was lying facedown, sprawled on what appeared to be a basketball court or parking lot.

Nearing the end of the one-minute video, one person is heard screaming “she dead … hey mek arwe go”, and someone, who appears to be an adult, stepped in.

Persons lifted and turned over the beaten victim and who appeared to unconscious, with her arms hanging limply at her side.

Minister Browne said, “We cannot in any way condone or even sit back quietly while students are being beaten while others are cheering on from the sidelines. In terms of our overall response, we are not going to do it ourselves, we are going to bring in the police with us.”

He warned, “And for those persons who are perpetrators and including the persons who are cheering on and the one posting those images and videos on Facebook, as much as the law allows us to be able to act, we are going to act.”

The minister said he also plans to ask the police to step up patrols in areas where students tend to congregate and engage in fights and other errant behaviour. Those areas include bus stations, playing fields and parks.

At the same time, police spokesman Corporal Frankie Thomas said lawmen are looking into the matter, but indicated the “poor” quality of the video makes it difficult to identify the students and onlookers.

He noted however, it is clear that a crime was committed in the form of the beating and also, possibly, in the posting of the video.

The officer pointed to the Electronic Crimes Act to support the conclusion regarding illegality of posting the video, but he said he was not in a position to specify the section of the law since he did not have the legislation before him at the time.

This latest video is among countless others on the Internet that show violent, abusive behaviour among students.