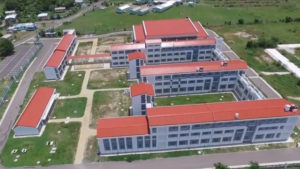 A total of $17 million dollars have been transferred to the UWI thus far to cover arrears and payment for the first months of operation.

The UWI Fourth Landed Campus is set open its doors on 1st September 2019. On that Sunday afternoon, it will hold an Ecumenical Service of Thanksgiving at the St. John’s Cathedral. On the Tuesday afternoon, September 3rd 2019, there will be a grand opening ceremony at the Five Islands Campus. The Public Works has been preparing the grounds and sprucing-up the buildings.

$500,000 have been approved for the purchase of computers and other necessary supplies, to meet the high-tech needs of the Campus. Three additional buildings are to be added to the Campus, two stories each, construction to commence in early November 2019. A beautiful architectural rendering, going back to the 2009 ABLP Manifesto when the journey started, will also be constructed on the Campus grounds. A Trust has been created that already has a Chairman and a Vice Chairman nominated; more donations and contributions are expected to be provided.