Usain Bolt relaxed ahead of 200m outing in London 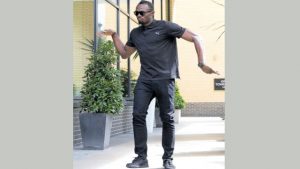 Jamaica and the rest of the globe will hold a collective breath as the world’s fastest man Usain Bolt looks to run his first race since pulling out of the Jamaica National Senior Championships. The sprinter is down to compete today in the 200-metre event at the two-day London Muller Anniversary Games.

Bolt, the six-time Olympic champion, has not run since July 1 when he suffered a hamstring injury and was granted a medical exemption by the Jamaica Athletics Administrative Association. All eyes will be anxiously fixed on Bolt — his first 200m of the year — to determine whether he is back to full fitness. Bolt addressed the issue at the press conference on Thursday morning via the IAAF website.

“I did have a strain, so if I had competed I would have probably torn the hamstring really bad. My hamstring is good and I have no issues right now. The doctor worked his usual magic on my hamstring, so it’s all good. Training has been going well and I’m here to win, so that’s my focus,” said relaxed-looking Bolt.“I need to do a 200m because I’ve not done one yet,” he added. “I was disappointed not to run one at the [Jamaica] trials and I need the races,” he noted.

“The 200m is my favourite event and I’m looking forward to my first of the season. I know I’m in good shape, so it’s just about execution now. I’m ready to run a fast time,” said Bolt.

Bolt will line up against fellow countryman Nickel Ashmeade, who was second at the Jamaica Senior Championship, and in-form Panamanian Alonzo Edwards, who has won two Diamond League races this season. The 2010 European champion Christophe Lemaitre of France, Britain’s 2014 European 200m champion Adam Gemili, along with the promising Nethaneel Mitchell-Blake complete the line up.

Veteran Michael Frater, Julian Forte and Everton Clarke of GC Foster College are the three Jamaicans to run in the 100m, which will include heats and final. Veteran Kim Collins of St Kitts and Nevis makes a return from injury, while Americans Mike Rodgers and Isiah Young, along with European champion Churandy Martina of the Netherlands, Richard Kilty of Great Britain, and James Dasaolu make a good 100m field.

Jamaica’s in-form quartermiler Stephenie McPherson will be in action in the 400m and will match strides with World Championship silver medallist, Shaunae Miller of the Bahamas; Americans Francena McCocory and Natasha Hastings; Great Britain’s Christine Ohuruogu and Anyike Onuora; and Frenchwoman Floria Guei.

On Saturday, Jamaica’s sprint queen Shelly-Ann Fraser-Pryce will contest the 100m along with Christania Williams, Simone Facey and Remona Burchell. Home girls Dina Asher-Smith, Desiree Henry, Asha Phillips of Great Britain, along with Michelle-Lee Ahye of Trinidad and Tobago and Marie-JosÃ©e Ta Lou of Ivory Coast are down to compete.

Jamaica’s O’Dayne Richards will be hoping to improve on his season’s best of 20.82m when he lines up in the men’s shot put alongside Americans Joe Kovacs, Kurt Roberts and Darrell Hill; Germany’s David Storl, and Tom Walsh from New Zealand.

Jamaica’s Damar Forbes will be hoping to continue his recent good form in the long jump, while Chanice Porter will compete in the long jump alongside Jessica Ennis-Hill of Great Britain.