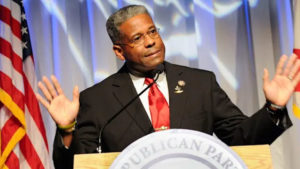 An unvaccinated Texas GOP gubernatorial candidate who was hospitalized with COVID-19 over the weekend has said that his experience had made him “even more dedicated” to fighting vaccine mandates.

Allen West, who is running to represent the Republican Party in next year’s Texas gubernatorial race, said in a video posted Monday that he was out of the hospital and “doing well.”

West, a former US representative for Florida and retired Army lieutenant colonel, had continued tweeting criticism of vaccine mandates and the Biden administration’s pandemic response from his hospital bed over the weekend.

“I can attest that, after this experience, I am even more dedicated to fighting against vaccine mandates,” West tweeted Sunday. In the Monday video, which was taken from his home, he also urged people “not to fear the virus.”

West announced Saturday that he and his wife Angela had both tested positive for the coronavirus and had to be hospitalized.

While his wife was discharged over the weekend, West said he had to stay a bit longer because there was concern over his oxygen saturation levels. He said his wife was vaccinated, but he was not.

In a series of tweets, West said he and his wife underwent monoclonal antibody therapy, which has been approved by the Food and Drug Administration for treating COVID-19.

He also said he was taking hydroxychloroquine and ivermectin, two unauthorized treatments for COVID-19. Former President Donald Trump had repeatedly hyped hydroxychloroquine, an anti-malaria drug, while fringe doctors and believers in the QAnon movement have been embracing ivermectin, a deworming drug.

West also called the COVID-19 vaccine “dangerous” in one of his tweets, despite multiple studies proving that the vaccine is safe and dramatically reduces the chances of severe COVID-19 cases, hospitalizations, and deaths.

According to a tweet from West last week, he spoke to a “packed house” two days before announcing he had COVID-19 at the Mission Generation Annual Gala Lakewood Yacht Club in Seabrook, Texas.

Representatives for West did not immediately respond to Insider’s request for comment.