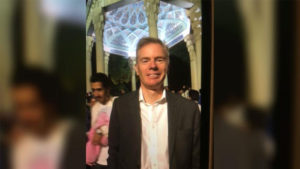 The United Kingdom has condemned the detention of its ambassador to Iran as a “flagrant violation of international law”.

Ambassador Rob Macaire was briefly detained on Saturday and accused of inciting protests against the government, the semi-official Tasnim news agency reported.

His arrest came amid renewed demonstrations against the Iranian government after it admitted responsibility for the fatal crash of a Ukrainian passenger jet earlier this week.

British Foreign Secretary slammed his arrest as a “flagrant violation of international law”. As a diplomat, Macaire should be immune from arrest and prosecution.

“The arrest of our ambassador in Tehran without grounds or explanation is a flagrant violation of international law,” Raab said in a statement.

“The Iranian government is at a cross-roads moment. It can continue its march towards pariah status with all the political and economic isolation that entails, or take steps to de-escalate tensions and engage in a diplomatic path forward.”

Further details of Macaire’s detention are yet to emerge.

Tasnim said the ambassador, who was appointed to the post in 2018, was arrested on suspicion of “organising suspicious movements” outside Tehran’s Amirkabir University of Technology.

Videos shared on social media showed hundreds of protesters gathered outside the university on Saturday.

In other videos, demonstrators were captured chanting “death to liars” and “death to the dictator”.

Nevertheless, demonstrators returned to the streets on Saturday after Iran admitted to accidentally downing the Ukraine International Airlines jet with a surface-to-air missile.

All 176 people on board the flight were killed in the catastrophic crash, which occurred just hours after Tehran fired a volley of ballistic missiles at two bases in Iraq hosting US forces. That attack came in retaliation for the killing of top Guards general Qasem Soleimani in a US drone strike last week.

Most of the victims were Iranian citizens or Iranian-Canadian dual nationals.