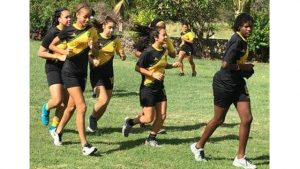 Members of Jamaica’s Under-20 Reggae Girlz team going through their paces.

After getting the desired start to the final round of the Caribbean Football Union (CFU) Under-20 Championship qualifying campaign, Jamaica’s Reggae Girlz will be hoping to defy injury concerns to go two-in-two at the Warner Park Sporting Complex in Basseterre, St Kitts, today.

The Jamaicans, who on Wednesday secured their first three points with a 1-0 win over Dominican Republic courtesy of Olufolasade Adamolekun’s 70th-minute strike, are now staring in the face of what should be their toughest task of this qualifying round.

They face a tough Haitian unit which currently heads the four-team standings with a superior goal difference after trouncing the hosts 12-0 in their feature contest at the same venue.

Kick-off is scheduled for 5:00 pm (4:00 pm), before St Kitts and Nevis do battle with the Dominican Republic in the feature contest at 7:30 pm.

Though contented with his team’s display in the opening contest, Head Coach Lorne Donaldson is cognisant that some sharpening up will be needed in the final third if they are to get by their arch-rivals.

“We had a good, solid performance against what was a good Dominican Republic team. They had players from USA and Spain that were very good, but we held our own and scored a world-class goal, but missed a few easy ones,” Donaldson told the Jamaica Observer via telephone yesterday.

“The Haitian team is very good and they look that way last night, because they were leading 7-0 after 40 minutes. They have been in residency for the last four years and their fitness is at the highest level. But we will be up for the challenge and hopefully be a little sharper around the goal,” he added.

However, it has not been smooth sailing for the Jamaicans so far as the squad has been plagued by injuries and, as such, the coaches have been put to the task in finding their best combination of players.

Canadian Ebony Clarke has been rested since the Trinidad and Tobago friendly encounters as a precaution, while another Canadian midfielder Maya Swaby-Wallerson, who was injured in that contest, has since returned home.

Meanwhile, the coaches have now placed midfielder Giselle Washington on the watch list as she picked up a knock in Wednesday’s game and her place in the starting team for today’s clash is an uncertainty.

“That (injury in the camp) has been the main challenge for us because we had to send back two good players, who one is a good defender and the other a good midfield player, so we have to be using the players as best as we can and hope that nobody else gets injured,” said Donaldson.

Due to those concerns, Donaldson revealed that there might be one or two changes to the starting 11, but was reluctant to confirm which position the other change would come from.

But the players in their 4-3-3 formation could again see Sydney Schneider in goal guarded by defenders Captain Emily Caza, Nevillgail Able, Jadyn Matthews and Erin Mikalsen.

Tarania Clarke and Alyssa Julien could be joined in the middle of the park by Clarke or Kevena Reid replacing Washington, while Shayla Smart, Adamolekun and Marlee Fray could again lead the attacking line.

The Jamaicans are favoured to secure one of two spots to the CONCACAF championships to be hosted by the twin-island republic next year.

The Caribbean winners will be pitted in Group B alongside defending champions United States and another powerhouse in Mexico along with Central Americans Nicaragua.

The runner-up team will be pitted in Group A alongside Trinidad & Tobago, Costa Rica and Canada.

The top three teams of the tournament will qualify for the FIFA Under-20 Women’s World Cup in France.