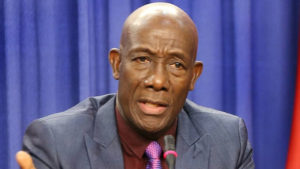 Prime Minister Dr Keith Rowley has urged labour leaders not to “overreact” after they threatened to shut down the country over the government’s latest wage offer to public sector workers.
Public sector trade unions Friday rejected a two per cent wage increase offered by the government of Trinidad and Tobago for their members, expressing disappointment and “downright disrespect” at the government’s attitude towards workers.

President of the Police Social and Welfare Association, Gideon Dickson, speaking on a television programme here, said he was astonished by the government’s recommendation.

“I, personally was shocked …and this is disheartening and as a matter of fact this is disrespectful,” he said, recalling that as of December 1, 2021, at least 36 police officers would have died as a result of the coronavirus (COVID-19) pandemic.

President of the Prison Officers Association, Ceron Richards, said the authorities should be treating wage negotiations as a serious business.

“We cannot at this juncture look at this negotiation as any game being played by any finance minister. If that is a game, he is in a game by himself, he is virtually on his own with that.
President General of the National Union of Government and Federated Workers (NUGFW), James Lambert, said he found the CPO’s officer “very disrespectful”.

“This is the worst officer in the history of this country to trade unions. This Government is showing that they do not care about the working class and we had enough of this nonsense. We are ready to shut down the country and hit the streets in our numbers. They take the workers for granted,” Lambert said.

But Rowley, speaking to reporters on Sunday on his return here from Guyana, said his administration is seeking to strike a balance in what it is capable of offering, along with job sustainability and perseverance.

“What this Government has done since 2015 is to make it quite clear that we are in support of improvement of conditions and of the sustainability of jobs in the public service. Even during our most di cult periods over the last few years, have we tried to solve our difficulties by removing public servants from their jobs, or retrenching them? And this is our seventh year in government. We have never taken that policy once in attempting to balance the budget.

“We said we would preserve the jobs as opposed to giving more to some while others lose their jobs. To that end, we have borrowed money, very early in our existence, and paid about $6 billion in back ay to those public servants. And, of course, that back pay was kicked in at the same time with a slight increase in pay. We’ve had di cult service since then.

“The statement of the Minister of Finance (Colm Imbert) recently was very clear, there is a little breathing space now. And immediately we looked to add something to public servants with the aim of preserving the jobs but to also see what we could add. Clearly what was offered has offended some people, but don’t try to get derailed from wanting more from less,” Rowley said.

Prime Minister Rowley said the current public service wage bill is TT$8.7 resulting in an additional cost on recurrent of TT$175 million in cost of living allowance (COLA), an estimated one billion dollars in back pay, and then an increase in monthly wages of TT$411 million.

“And that’s just from the two per cent increase. If perchance we have a four per cent increase which some are talking about, back pay would see an increase to TT$1.8 billion, and the running cost would increase by TT$588 million. And then you hear people talk about 10 and 15 per cent. At 10 per cent, back pay payment would jump to TT$4.5 billion and there would be an increased running cost of TT$1.1 billion”.

Rowley urged the labour leaders and the population to “put that against a recent report of a slight increase in revenue from the Minister of Finance and then the huge debt this country ran up pre-COVID and during COVID and then come to a conclusion if shutting down the country is an appropriate response to these circumstances.

“We would love to give the public servants as much as they expect but it has to be tempered by the reality. Do not for one minute be guided by the fact of current oil prices standing at about US$100. Because the oil market overnight can change.

“So if we commit ourselves to making payments on what prevails now, and then tomorrow the price drops to US$60 or US$50 we would have worsened our position. Reason is required and patience is essential. I think you would want us to continue providing jobs and improved payment but let us not get too carried away,” Rowley said.

Last Monday, Imbert said the local economy is set to generate an additional TT$4.5 billion to five billion dollars this year due to a general recovery in most sectors of the economy and higher oil and gas prices.

Imbert, piloting the motion to adopt the Report of the Standing Finance Committee, told legislators that the additional money will be focused on paying the backlog of bills that has grown over the last several years because of simply inability to generate the revenue”.

Imbert said among the backlog would be the allocation of TT$1.6 billion to repay money owed to businesses under the Value Added Tax (VAT) system.