Trinidadians go to the polls after bitter and “brutish” campaign 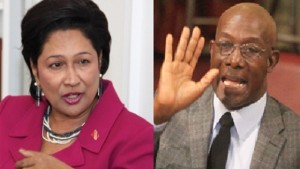 PORT OF SPAIN, Trinidad, Monday September 7, 2015 – More than a million voters are eligible to cast their ballots when polling stations open at 6 o’clock this morning, following what the chairman of the Elections and Boundaries Commission (EBC) described as the “most brutish” campaign he had ever seen.

Dr. Norbert Masson, who has headed the EBC since 2005 and served as a commissioner for several years prior, lamented yesterday that “the environment created by this election’s electioneering campaign was the most brutish, acrimonious, rampageous and vitriolic that I have witnessed in all my years at the Commission”.

The three-month campaign that preceded today’s general election was marked by allegations and counter-allegations of legal and moral wrongdoings and what Masson said was “obscene expenditure on political advertisements” and “a concentration on matters technological and materialistic [that] has led directly and unfortunately to an almost total abuse of moral and ethical values in practically everything we do”.

But the EBC chairman urged voters not to be bamboozled by the electioneering campaign or the foolish antics of those who should know better.

“As you go to your polling station . . . be strong in your resolve, exercise courage,” he said.

“Go boldly and ignore those who may seek to divert your course of action. Take unto you the whole armour of the Almighty by whatever name. Thus prepared, you need fear no enemy of your intention. May the Mighty Architect guide you in all that is true! Do your duty and vote for the candidate of your own choosing.”

Ahead of today’s general elections, polls indicated it would be a close battle between the incumbent People’s Partnership – a coalition of the United National Congress, the Congress of the People and the National Joint Action Committee – which is seeking a second term in office and the main opposition People’s National Movement (PNM). The other major contender is the Independent Liberal Party (ILP).

There are 41 seats up for grabs in the election that is being observed by Caribbean Community (CARICOM) and the Commonwealth missions.