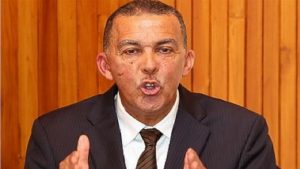 Trinidad and Tobago President Anthony Carmona has expressed frustration that his country and other CARICOM states have not replaced the Privy Council with the Caribbean Court of Justice (CCJ) as their final authority in legal matters.

Though 12 of the 15 CARICOM territories have signed the agreement establishing the CCJ, which was launched in 2005 as the final arbiter in legal disputes among and within regional members, only Barbados, Guyana, Dominica and Belize have accepted this court as the end decision-maker.

Carmona, who served as a High Court Judge before being appointed as President in 2013, expressed his frustration in Barbados during a presentation on Redefining Caribbean Pride for the 21st Century Youth, to University of the West Indies, Cave Hill Campus, undergraduate organization, Students Today Alumni Tomorrow.

“Why have we yet not all subscribed to the jurisdiction of the Caribbean Court of Justice?” he asked

President Carmona said he sees acceptance by all territories of CCJ to be the court of last resort as another step towards fortifying the Caribbean identity.

“Perhaps the day will finally come when we can all take pride in, and responsibility for, defining, shaping, writing and ultimately, rewriting our own jurisprudence and laws in the context of our own peculiarities and the relationships among our own member states. The arguments for a common jurisprudence have been exhausted, but are not exhaustible.”

CCJ judges are predominantly of Caribbean origin, and according to a CARICOM document, “judges appointed to the CCJ are evaluated on the basis of wide-ranging criteria that include experience, high moral character, intellectual and analytical ability, sound judgment, integrity and an understanding of people and society”.

Carmona believes that with the majority of CARICOM nations yet to make that constitutional move towards replacement of the Privy Council with the CCJ for their citizens, creates a deficit “that mitigates against the spirit of the Caribbean integration movement”.

“There have been many failed attempts at an integrated Caribbean in the past, with just a few making successful strides in this regard. Today, Caribbean societies are confronting even greater difficulties in treating with such issues as crime and security, health issues, and, of increasing importance, the danger posed by climate change. The need to pool resources has therefore never been more urgent.

“There needs to be an embracing approach by all leaders. We must not be concerned about what we can get from each other but rather how we can help each other,” he said.