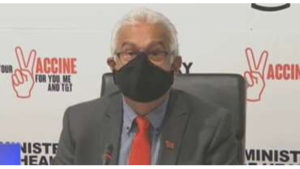 PORT OF SPAIN, Trinidad (CMC) – Trinidad and Tobago has accused developed countries of hoarding vaccines to treat the Monkeypox virus, saying that the action is reminiscent of the situation that existed with the procurement of coronavirus (COVID-19) vaccines.

“Something rather unfortunate is happening on the vaccine front. I had hoped we would have learned from COVID-19, but we are seeing once again where globally the bigger, wealthier countries are stockpiling vaccines for their populations, leaving smaller countries like Trinidad and Tobago at a disadvantage,” Health Minister Terrence Deyalsingh told a news conference.

“I’d like to use this platform to make an appeal that the Monkeypox vaccine should be made available on a more equitable level to all countries based on, not only their population size but, their risk profile and so on,” Deyalsingh said, adding that the country is seeking to secure antivirals and the Jynneos vaccine.

The Health Minister said that the Pan-American Health Organization (PAHO) would be providing test kits to the Trinidad Public Health Laboratory this week with respect to the island’s local testing capacity for the Monkeypox virus.

“It was expected that it would take another week for them to do their validation. There is capacity at CARPHA (Caribbean Public Health Agency) for testing, and the organisation has been testing in the Caricom region. We have sent two test samples for validation even though there are no suspected cases in Trinidad and Tobago,” he said.

Deyalsingh told reporters that while there are suggestions that Monkeypox is spread by men who have intercourse with men, he is urging that no particular group of people should be stigmatised, reminding the population that when COVID-19 first emerged, it was known as the “Chinese virus.

“Discrimination and stigma do not help. Monkeypox can infect any of us who are in close skin-to-skin contact. We should not stigmatise any community, but take steps to protect all of us,” he added.

Jamaica and the Bahamas are the only two Caribbean Community countries that have confirmed cases of Monkeypox, with the signs and symptoms including rash, fever, enlarged lymph nodes, back pain and muscle pain.

Meanwhile, as Trinidad and Tobago announces plans to lift the policy of the mandatory wearing of masks to curb the spread of COVID-19 this weekend, health authorities have confirmed the presence of the Omicron BA.5 variant.

Chief Medical Officer Dr Roshan Parasram said the BA.5 variant had been detected among 20 samples sent for genomic testing at the University of the West Indies last week and that the data suggests that while the BA.4 and BA.5 variants may be more transmissible, none of the sub-lineages of Omicron have been shown to be more virulent.

“What we are mostly concerned with at this point in the pandemic is the impact on the hospitalisation and the impact on the number of people who have passed away due to the disease itself. Currently, there are only 91 people in various hospital facilities in Trinidad and Tobago, which is lower than April 2021.

“We may expect an increase in the number of positive cases but once that doesn’t result in a concomitant increase in hospitalisations and death then the concern will be a little less.”