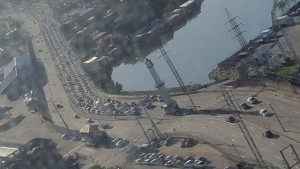 This image from Marlon Arman-Marquis shows an aerial view of the road block at the Lighthouse in Downtown, POS. (Credit: C NEWS LIVE/Facebook

PORT-OF-SPAIN, Trinidad, Monday March 23, 2015, CMC – Trinidad has come to a virtual standstill as police mounted roadblocks across the island, but denied reports that their actions were in support of industrial action being planned in support of wage increases.

Police spokeswoman Ellen Lewis, speaking on radio here, said that the roadblocks had been planned well before Monday and were not part of any industrial action being planned by police officers to protest the slow pace of negotiations for salary increases.

She said that while some of the roadblocks were due to end early on Monday morning, motorists were calling radio and television stations complaining that they had been stuck in traffic for more than two hours.

“Those exercises were planned and scheduled…but all our exercises are intended to ensure we maintain law and order and therefore the public ought to be a bit understanding and considerate in this regard,” Lewis said.

But motorists and others have called the media to say that the roadblocks appear to be fake as police officers ask a number of questions not related to the traffic situation.

“We are being told that police are checking tire-pressure, spare tires, dip sticks for oil, handbags of passengers on buses and maxi taxis and more,” said one television station here.

“I am sitting here for the past two hours and can’t move,” said one distraught woman motorists, as school children were seen returning to their homes. In Tobago, one motorist said that he had been stuck in traffic for more than two hours on a trip that usually takes seven minutes.

Many workers said they were also returning to their homes, but a senior official of the Police Social and Welfare Association dismissed any industrial action being taken by law enforcement authorities, who earlier this month had stayed away from their jobs to protest the decision by the Chief personnel Officer not to give a 14 per cent salary increase as being demanded by the officers.

Last week, the Secretary of the Police and Social Welfare Association Michael Seales said that members have been complaining that since 2011 there has been no progress in the negotiations with the Chief Personnel Officer (CPO).

Meanwhile, Caribbean Airlines (CAL) announced Monday that the departures of several of its domestic and international flights were experiencing delays due to a nationwide traffic gridlock in Trinidad and Tobago.

“The airline will waive date change penalties for any passengers who may be affected,” it said, urging passengers to check with agents or its website for further updates.