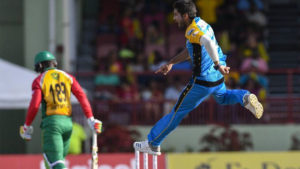 Man-of-the-Match Raymon Reifer produced the third best figures in Caribbean Premier League (CPL) history as the Barbados Tridents opened their campaign on an emphatic note with a 30-run victory over Guyana Amazon Warriors on Sunday night.

The West Indies left-arm seamer picked up five for 20 from four overs as the hosts, asked to chase a venue record 186 at the Guyana National Stadium never came to grips with the tall order and subsided to 155 for eight from their allotted 20 overs.

Sherfane Rutherford resisted with 48 and captain Shoaib Malik got 38 to get Amazon Warriors up to 124 for three in the 16th over but they lost five wickets for 30 runs, courtesy of Reifer’s magic. Test star Shai Hope had earlier sizzled with a breathtaking 88 off 45 deliveries as Tridents, sent in, raced to a record 185 for four off their 20 overs.